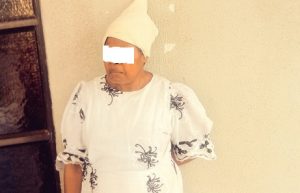 An Onitsha-based businesswoman, Celestina Oba was, on Thursday, arraigned at the Federal High Court, Awka, by the National Agency for Food and Drug Administration and Control (NAFDAC) on two-count charges of importing and selling fake cosmetic products at God’s Mercy and Miracle line, Ogbaru main market, Onitsha , Anambra state.

The prosecution, while reading the charges, Oba, who resides at No.5 Ugochukwu Lane, Nkpor in Onitsha on or about the 25th day of October 2017 at God’s Mercy Line, Ogbaru Main Market, “did sell cosmetics to writ, Eva soap without registration number and thereby committed an offence contrary to section1 (1) of the Food, Drugs and related Products (Registration) Act CAP F. 33 LFN 2004 which is punishable under section 6 (1) (a) of the same Act.”

Count II also stated that “the same woman under same date and place did sell to writ , Eva Soap in a manner that is false and thereby committed an offence contrary to section 5 (a) of food and drugs at CAP F32 LFN 2004 and punishable under section 17 of the same Act.

The defendant, however, pleaded not guilty and was granted bail by the trial Judge, Justice I. N. Oweibo with the sum of N500,000 but to remain in the custody of her own lawyer, Amaka Ezeno Esq till December 13, when the matter was adjourned for trial.

Counsel to the Federal Government of Nigeria and NAFDAC, A.J. Washington, while warning against the influx of fake and substandard products in various markets in the country, said Eva complexion care soap in many exciting variants, is manufactured in Nigeria solely by Evans industries limited, Ikeja, Lagos State, while warning the public to beware of all cloned or unregistered products.

He noted that NAFDAC was poised to fight on towards eradicating fake and substandard products in the country.

It would be recalled that a team of NAFDAC Investigation and Enforcement officers working on a tip-off had last Monday impounded fake and adulterated products worth over N20 million at the Relief and Police Officers Wives Association (POWA) Markets, all in Onitsha, the business hub of Anambra State.

The confiscated products include counterfeited Eva soap, imported Goya Extra Virgin Cooking Oil, unregistered alcoholic beverages – Baby Oku and White Mischief, imported Olivea Vegetable Oil and locally made insecticides which the agency said posed a major risk to human health. Over seven shops filled with the counterfeited products were closed down by the agency while two suspects were arrested.

Addressing newsmen after the exercise, the agency’s Director, Investigation and Enforcement Directorate, Mr. Kingsley Ejiofor, who led the operation, said the action would help curb the menace of counterfeiting of food and drug products in Nigeria. Ejiofor who promised to clampdown on importers, distributors and marketers still stocking banned regulated products, said the impounded vegetable oil and alcoholic beverages were below standard, uncertified and not registered by NAFDAC

He advised Nigerians to be wary of drugs, food and other regulated products they buy and should also demand for receipt of any product they purchase to enable them to track the fakers within the markets. Ejiofor further affirmed that importers of fake products into the country would get life sentence once the National Assembly approves a bill by the agency seeking for such punishment, urging traders and citizens to report suspicious activities to the agency.