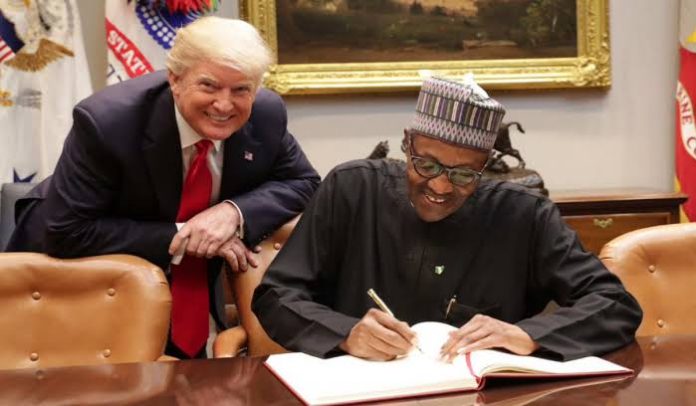 President Muhammadu Buhari has said that he was pained when United States President, Donald Trump, called him into his office at the White House and asked him, “Why are you killing Christians?”

Buhari said he took his time to explain to his US counterpart that the killings of Christians in Nigeria had nothing to do with ethnicity or religion.

The President disclosed this on Tuesday in Abuja at the First Ministerial Performance Review Retreat of his second term.

Buhari said, “I believe I was about the only African among the less developed countries the President of United States invited and when I was in his office only myself and himself, only God is my witness, he looked at me in the face, he said why are you killing Christians. I wonder, if you were the person how you would react. I hope what I was feeling inside did not betray my emotion, so I told him that the problem between the cattle rearers and stagnant farmers I know is older than me not to talk of him. I think I am a couple of years older than him.

“So, I tried and explained to him, this has got nothing to do with ethnicity or religion. It is a cultural thing which was failing the nation.

“The next problem I want to tell you is how we found ourselves when I say us, I mean members of the APC. When we promised three things, security, economy and fighting corruption, we repeated the same thing last year. But I want the Nigerian elite to please encourage and judge us fairly when we came. Between 1999 and 2014, I will like you to please check the average production was 2.1m barrels per day, the average cost was $100 per barrel.

“When we came, it collapsed to $37 to $38 per barrel and the militants were unleashed on the administration, the production went down. I want you to please reflect what was the condition of the infrastructure then in spite the earnings, the roads, there was no power and up to now there is no power, where did the money go.

“So, please encourage your friends, the elites, to reflect on what this administration has done, what APC has done and what we have achieved. Well I am doing my best, God has given me two chances.”

Reporters view: : Buhari was elected President to solve the problem between farmers and Herders : Simply ban open grazing of any form and introduce ranches,if Buhari is sincere