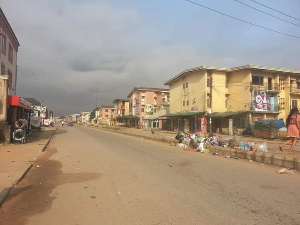 The directive by the Indigenous People of Biafra, IPOB, that all easterners should sit-at-home might have succeeded as economic activities in Owerri and other parts of Imo State have been shut down.

IPOB had declared the sit-at-home in protest to the official visit of the President, Muhammadu Buhari to Imo State.

JOURNALIST101 had reported that the President arrived in the state on Thursday morning for the commissioning of some projects executed by Governor Hope Uzodinma.

IPOB while declaring the Thursday a sit-at-home argued that the president isn’t welcomed in South East while her leader, Mazi Nnamdi Kanu, still remain in the custody of the Department of State Services, DSS.