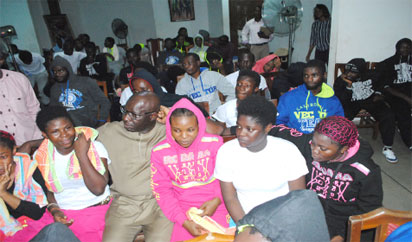 “I had to drink my urine to survive in the desert, Nigerians were just dying like chickens everyday on our journey through the desert. I buried some of them and others we just threw away their bodies because there was no time to bury them. I can never wish my enemies to go through such horror in a bid to travel outside the country to earn a living”.

This was an account of one of the 84 Nigerians who tried to escape to Europe through Libya but were deported to the country after spending one and a half years in dehumanizing conditions. It was indeed a tale of horror and a pitiable sight last Tuesday at Government House Benin City, when Governor Godwin Obaseki, received 84 Libya deportees as they narrated their ordeals in the hands of the Libyan authorities even as they also lamented the death of many Nigerians in the desert.

I went through hell in Libya——Survivor

Speaking with Saturday Vanguard, one of the deportees, 27 years old Eric Idemudia narrated his harrowing experience on his aborted journey to Italy through Libya “I stayed in Libya for one year and six months. My journey started when I met one man called Dickson in Benin who asked me if I was interested in traveling out and I said yes. He said he would help me to Italy but I told him I was only interested in going to Austria. When I asked him how much it would cost me, he said N500,000 and I told him I would pay. So, I looked for the money and I went to give him at Agbor park after informing my family that I was traveling outside the country. When I got to Dickson I discovered that we were five boys and nine girls.

The next day we boarded a vehicle to Kano and from there proceeded to Niger Republic on motorcycles. In Niger, we stayed in one Alhaji’s ghetto, spent about two weeks there before we mounted pressure on our sponsor to call the Arab man who was to take us to Libya. I complained to our sponsor that he did not tell me this was how the journey would be but he kept telling me that I should not be bothered. I was the one paying for everything, my family was even sending money to me. Then, one night they came with about 16 Hilux vehicles and took about 200 of us. 34 persons were inside the vehicle I boarded as we squeezed ourselves inside it. We spent two weeks in Agadez before we entered the desert.

After the third day in the desert, one of my friends said he was thirsty, but unfortunately what was available in the desert was salt water. At a point, my friend ran to meet somebody in another Hilux to beg for water but unknown to him, the person added Tramadol into the water and my friend drank it. After drinking it he became dizzy, he fell down and died. We dug the ground of about one foot, buried him and we moved on. “The next day, Saturday, another boy complained of being thirsty, and    we advised him to drink his urine. I had been taking my urine also, that was the only way to survive in the desert because there was no water. As we set out again at about 2am to continue our journey, this particular boy fell down and died.

In the desert, there was nowhere to hide , the sun was just too hot. On our was to Tripoli, about ten persons died and the drivers said we should just push them out of the vehicle as there was no time for burial. I spent sixteen days in the desert before we got to Libyan Toll gate where we slept. The following day we got to a place called Saba, where we met a man who was notorious as a killer. He would get hold of the immigrants and ask them to inform their family to send money to them and those who could not get money, he would kill them. We saw a lot of corpses in that place.

At that point I wanted to go back home but it was not possible. I was in that ghetto for five months, I could not get to the sea to move to Europe. “Another thing I discovered was that some of us were sold as slaves to some Nigerians who were into human trafficking. They would ask the Nigerian immigrants to call their family in Nigeria to send money to them. We were therefore at their mercy because they gave us little food just to survive everyday.    I was sold to one Nigerian unknown to me that I was a slave to him. My people back home sent over one million naira to him thinking I was the one making use of the money.

I spent five months in another ghetto, and it was there that some people came to arrest us, and took us to a prison called Griyan prison. We were fed with one small bread called Oza, and that was what we would eat throughout the day. The second day they came with partly cooked rice, soaked in water and people were eating and dying. After spending two days we were moved to Tripoli, which was the worst. They brought one pack of rice and asked five of us to eat it.

That was what we suffered before we were finally deported. “I cannot advise anybody to pass through this in life. But the problem is that these sponsors are still hypnotizing our people to go this way, collecting money from them. People died like chickens every day there, I buried many people with my bare hands. So, it is better to suffer here than over there. Even if you don’t have food to eat in your country it is better than going to Libya to die.

I was a bricklayer before I left and I am ready to go back to it”. One of the deportees, Miss Blessing Sunday was from Ovia North East Local Government Area of the state. Another deportee,    Miss Rosemary Oboh pleaded with the governor to employ her father while expressing their appreciation to the governor for the warm reception accorded them. She said, “It was wrong for us to sneak out of our country. We did it because we thought we would be able to achieve something. We love you for welcoming us back home as a father, a leader and our governor”.

While receiving the deportees, Governor Obaseki who was visibly touched, assured the deportees comprising sixty males and twenty-four females, that his administration would place them on a monthly stipend for three months while they undergo various vocational training. “You should see your current situation as a passing phase in the journey of life. You are back to where you came from and you will be taken care of.

For the next three months, we will put you on a special stipend” the governor said adding that his administration would ensure that they receive vocational training while those who were interested in pursuing higher education would be given scholarship.  He explained that the goal of the government was to make them ambassadors who would sensitise other youths about the risks associated with illegal migration. “You will not wish what you went through for even your enemies.

So we will make you ambassadors, to share your harrowing experience with others. We are not out to judge you, we will not judge you. We are all humans and we all make mistakes. Anybody can be deceived. I want to welcome you back home”, the governor said Earlier, the Attorney General of the State and Chairman Task force on Anti- Human Trafficking, Professor Yinka Omorogbe informed the deportees that her team was willing to receive all Edo indigenes back home because they were precious to the state. On how the returnees were received, Prof.Omoregbe narrated to Saturday Vanguard that “We received 84 returnees from Libya, comprising 60 men and 24 females.   We have been doing a lot of counseling, we gave them welcome packs and we tried to let them know that they were precious people. We told them that this was a new beginning that they were back home to settle down.

The National Emergency Management Agency, NEMA informed us that this batch was coming, we then dispatched our team to Lagos to bring them back to Benin. In our effort to ensure that they were fine, our medical team carried out full examination of the returnees. Some of them were referred to the hospital for further medical treatment. We intend to rehabilitate them back into the society. We have programmes lined up for them and we are determined to give them another lease of life”.