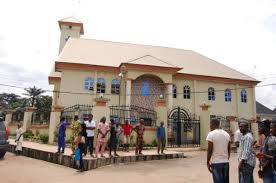 The police, however, said they have no need to arrest him, as he was equally a victim of the attack that claimed the lives of 13 people.

Ikegwuonu returned to his community on Saturday and attended Mass at St. Philip’s the next day.

The Police Public Relations Officer, ASP Nkeiru Nwode, who disclosed this to newsmen while responding inquiries, said the police had already invited Bishop for questioning, like they did some leaders of the community.

Noting that the command was not aware of Bishop’s return, she asked: “Do you want us to arrest him? You know he is a victim. We’re not interested in his return. We’ve invited him for Friday and he must come because failure to honour our invitation is an offence.”

Meanwhile, Ikegwuonu, on Monday  visited the Nnamdi Azikiwe University Teaching Hospital, Nnewi, where he went round to sympathise with victims of the attack on St. Phillip’s Catholic Church.

Accompanied by some of his friends, he moved round the wards chatting with the victims and also asked them how the incident happened.

A source present at the hospital when he visited said: “The victims who have been traumatised since after the incidence were visibly happy over his visit.

“One of the victims, a lady, on sighting him sat up in happiness and greeted him for coming to check on them.”

Ikegwuonu, who is based in South Africa, has done some projects in the community, including tarring of roads and building of three Catholic churches, including St.  Phillip’s, which made him a household name in the area.

The attack on the church was described as sacrilege as parishioners had trooped to the church as early as 6am to attend the first Mass of the day. but around 6:45am, a gun-wielding youth stormed the church and opened fire on Ikegwuonu’s father after which he started shooting indiscriminately.

There was pandemonium as people ran for cover, but when the smoke settled, 13 persons wee shot dead while several other were injured.