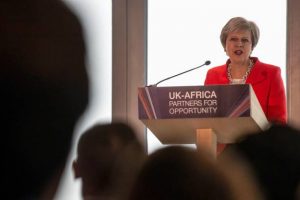 Two of the world’s frontline nations, America and the United Kingdom have raised the alarm over the economic and political situations in Nigeria.

While America is concerned about the political landscape it claimed is blighted by impunity, which it said poses a grave threat to the almost two-decade-old democracy if not urgently redressed, Britain is worried by the bludgeoning poverty in its erstwhile colony.

Ahead of her visit to Nigeria today, British Prime Minister Theresa May frowned at what she described as the rising inequality in wealth distribution. According to her, with no fewer that 87 million of its citizens living below $1.90 a day, Nigeria is home to the poorest people in the word.

The prime minister, who spoke during her visit to Cape Town, South Africa, yesterday, expressed sadness that though much of Nigeria is thriving, with many individuals enjoying the fruits of a resurgent economy, 87 million Nigerians still live on less than $1.90 a day.

“South Africa, for so long blighted by the evils of Apartheid, is free, democratic and home to one of the continent’s largest economies. In Cote D’Ivoire, United Nations peacekeepers have gone home and GDP is growing three times faster than in Europe. And Ethiopia – for a generation of British people often associated only with famine – is fast becoming an industrialised nation, creating a huge number of jobs and establishing itself as a global destination for investment.

“Yet, in a situation familiar to nations around the world, progress has not been uniform. As well as emergent democracies and growing economies, Africa is home to the majority of the world’s fragile states and a quarter of the world’s displaced people. Extremist groups such as Boko Haram and al Shabab are killing thousands. Africa’s ocean economy – three times the size of its landmass – is under threat from plastic waste and other pollution.

“Most of the world’s poorest people are Africans. And increasing wealth has brought rising inequality, both between and within nations. For example, much of Nigeria is thriving, with many individuals enjoying the fruits of a resurgent economy. Yet 87 million Nigerians live on less than $1.90 a day, making it home to more very poor people than any other nation in the world.”

The British High Commissioner to Nigeria, Paul Arkwight had announced on his Twitter handle @paulTarkwight that the Prime Minister would meet with President Muhammadu Buhari in Abuja, saying both countries were expected to work in partnership on trade, security and tackling the scourge of modern slavery and human trafficking.

While the UK is troubled by the country’s parlous economic outlook, America said Nigeria being a role model to all black race in the world and other developing countries should allow democracy to flourish.

“There is impunity in Nigeria and that needs to be addressed. Impunity is a threat to democracy,” the United States of America Embassy Counselor for Public Affairs in Nigeria, Mr. Aruba S. G. Amirthanayagam warned in a chat with journalists after paying a courtesy visit on Alhaji Zubair Idris, executive director of a privately-owned radio station in Minna, Niger State, yesterday.

He said the United States expects that the 2019 general election would be free, peaceful, credible and transparent while urging all stakeholders to work towards achieving the goal.

He also charged the Independent National Electoral Commission (INEC) to replicate its performance in the 2015 general election generally acknowledged as free, fair and transparent in 2019.

According to him, “I think we should repeat the success we had in the last election because we have had elections in some parts of Africa that have not gone well. What we got in 2015 was great for Nigeria and for the rest of Africa and other developing countries.

“The success recorded in the 2015 general election must be sustained. United States of America will not expect anything less than that.”

He assured that America would not take side in the 2019 election in Nigeria “America will not take side, we want the winner to be elected in a free and fair contest”, he said insisting that “from the US perspective we want free peaceful credible election, we will do all we can to assist Nigeria’s government.”

When asked to comment on the statement credited to President Donald Trump that President Muhammadu Buhari was “lifeless”, the counselor said: “We have no specific comment on that, a newspaper published it, the paper should comment on it.”

Meanwhile, the Peoples Democratic Party (PDP) has urged the British Prime Minister to take President Buhari to task on alleged human rights violations and disobedience to court orders by his administration.

The PDP in a statement by its spokesman, Kola Ologbondiyan, also charged May to demand answers from Buhari on alleged cases of extra-judicial killings, unlawful arrests and detention and lack
of accountability by the government.

The opposition party urged the British leader to resist alleged choreographed plan by the Presidency confine her to Aso Rock stating that she must insist on visiting other parts of the country so as to appreciate the the true state of affairs. It also urged May to extract a commitment from Buhari that the 2019 general elections will be free and fair.