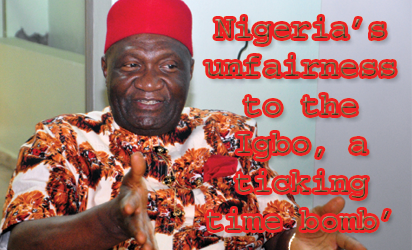 Why Igbo youths are bitter–Ohaneze president

The agitation for restructuring of Nigeria was again renewed in Lagos when some eminent and elder statesmen converged on the city to honour one of their own.

The event was a dinner organised by old members of the Sigma Club of University of Ibadan for the President-General of Ohanaeze Ndigbo, Chief John Nnia Nwodo. The dinner turned to be a forum to discuss critical issues affecting the country and why President Muhammadu Buhari  must  take immediate steps to restructure Nigeria and prevent the country from disintegrating.

In their views, the unity of Nigeria and harmonious co-existence of the various ethnic nationalities will be deepened by fiscal federalism and restructuring of the polity.

According to him, the level of the abuse of fundamental rights in the country’s political system had led to a state of dissatisfaction, anger and impatience among the youth.

He stressed that some tribes are treated as unwanted species, despite the provision of federal character and equal representation in the country’s Constitution.

The Igbo leader also objected to the killing of unarmed members of the Indigenous People of Biafra (IPOB) and the Movement for the Actualisation of the Sovereign State of Biafra (MASSOB).

He wondered why the youth, who were clearly not happy with the unfair treatment being meted out to them in a country that is supposed to be theirs, were brutally killed.

Insisting that the youths did not warrant being killed, Nwodo also berated the Federal Government over continuous detention of IPOB leader, Nnamdi Kanu.

Chief Nwodo submitted that there was no need for a bill on grazing reserve, adding that what the Federal Government should have done was to ask states to create the reserves and confine the herdsmen to the reserve for a fee.

“The agitation for Igbo presidency in 2019 is a non issue as far as I am concerned. As the president of Ohanaeze Ndigbo, I am apolitical, I am not a member of any political party.

“This is an issue for political parties, it has nothing to do with me. The issue of power rotation among regions is not new, it is some how aligned with the doctrine of federal character which is in our constitution.

“No party has called for nomination. I don’t think agitation for Igbo presidency is important now; what Nigerians are asking for is restructuring of the country to be a true federation. It cannot continue to be a federation in name, the political lexicography for federation is an independent federal unit.

“The moment you have independent federal unit, being state or regions and they have control over the resources they produce, they will contribute on agreed proportion to the Federation. The question of who is president and  where he comes from will die down. It is going to be a matter of who is competent.

“MASSOB and IPOB organisations, no matter how divided they appear in public, are basically motivated by the same sense of outrage and bitterness. Our young men and women can no longer tolerate a second class status in their own country,” he said.

Anyaoku in his opinion while reviewing the current situation of the country, expressed dissatisfaction, saying the value system has collapsed in Nigeria and the development is hugely responsible for the menace of graft in the country.

He canvassed for return of the country’s lost values, which placed character and integrity above wealth acquisition.

He condemned today’s reality, which makes children and adults not to recognise that hard work should be embraced by everyone. He explained that the collapse of the age-long value system of integrity, hard work and patriotism has given way to the increased wave of corruption and the preference for get-rich-quick syndrome in the society.

In his word: “Corruption is the greatest under-miner of our national development and it is a consequence of the absence of those societal values. In our society today, the prevailing culture is that children and adults no longer recognise that success must come from hard work. They no longer recognize that integrity should be more valued than the possession of wealth.”

He canvassed the extension of Sigma Club’s motto to all the tertiary institutions in the country.

Chief Clark who did not also hide his feeling on the issue of restructuring, said the current situation of the country is not a legacy left behind by people who fought for the independence of Nigeria.

“Nigeria is very sick today. The Nigeria, which our founding fathers like Chief Obafemi Awolowo, Dr Nnamdi Azikiwe and Sir Ahmadu Bello bequeathed to us, is no longer what we have. At independence, we had a constitution that said there would be three regions, no one is superior to the other.

Chief Adebanjo, who commended Ndigbo for electing Nwodo as Ohanaeze President-General, said his election came at a time people like him were needed to move Nigeria forward.

He aligned himself to the submission of his co-leaders, saying the country was sitting on a time bomb, if the issue of restructuring was not addressed.

In his remarks, Prof. Afonja, the oldest Sigma Club member, stressed that the vision of the founding fathers of the club, which was to further unity, must be adopted to solve the challenge of unity facing the country.

He stated that Sigma Club is a club of gentlemen with values, adding, “we must strive for the values of integrity, hardwork and belief that good character is far above irresponsible personal wealth.”

Welcoming the dignitaries to the occasion, the president of Old Sigmites, Lagos, Dr. Faye Iketubosin said the association honoured Nwodo for his outstanding contributions to the society and for his current position in Igboland.