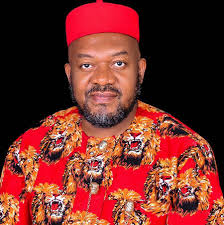 The dead have a special place in Igbo cosmology. When Ndigbo pray, break kolanut and pour libation, after calling on Chukwu Okike (God of creation), they call on their late relatives, known as ancestors. Sometimes they call them by name, one after another, asking them to help protect the family, compound and kindred.

Modernity and the advent of the Christian religion, which many still regard as the whiteman’s religion has eroded some of these traditional Igbo ways of worship and communing with their God (Chukwu Okike).

Deaths, like births are very big occurrences in Igboland. Present day realities suggest that deaths are celebrated more, than births judging by the large feasting that follows the death of a family member in Igboland. Such burials last many days and cost a fortune. However, many communities are beginning to regulate such outlandish burials by producing burial guidelines for their communities. There are hefty fines to pay for disobedience. Anambra state also has a burial law in place.

In Enugwu-Ukwu, Njikoka local government area of Anambra state, for instance, the new burial law by the Enugwu-Ukwu traditional authority stipulates that burial activities must be concluded in one day, and no longer spread across many days. The law also states that canopies set up for guests must be dismantled by 7pm of the burial day, and no music should be played in the compound past 7pm. Burial clothes are limited to only immediate family members. Only two types of soup are allowed to be served, one type of ‘swallow’ (semo, pounded yam, garri or any other). Only one type of rice meal will be served guests, and no longer the multiple choice of jollof, rice and stew, rice and sauce.

The traditional ruler of Enugwu-Ukwu, Igwe Sir Ralph Obumnaemeh Ekpeh said the burial law will encourage people to celebrate their loved ones when they are alive, rather than in death. He said it will also reduce the financial burden families face trying to outdo each other in an attempt to give the dead a ‘befitting burial’.

Christianity has popularised Christian or church burials in Igbo land. However, traditionalists in addition still perform traditional burials for the dead, after the Christian burials, especially for titled men in the communities, Ndi Nze, Ozo etc.

The belief amongst the traditionalists is that if such is not performed, ‘Ozu awaa na afa’ (the dead will be restless and may cause misfortune for the family).

My late father, Nze Edwin Okonkwo Nwora, was a member of the Nze traditional society in Enugwu-Ukwu. After his Christian burial which held on Friday, September 25th, 2020, the traditionalists sent word to the family that the traditional burial ceremony has to be performed as well. This practice is known as ‘Igbukpo ozu ife’ (Animal sacrifice). After due consultations, the family set a date for this.

The ceremony is not performed inside the family compound but outside. Certain quantities of yams and cooking ingredients are provided, 2 native chickens, coconuts and kolanuts, 2 goats and some drinks too. Ndi Umunna (kindred relatives) gather for this. A senior member of the bereaved family personally slaughters the goats and chickens while praying to God to accept the soul of the departed, and also calling on the dead, plus other ancestors to continue to ‘chekwaa ngwulu (protect the compound).

Afterwards, kolanuts are broken and the items are cooked in the presence of everyone present. The yams are cooked as porridge with some goat meat. What is left of the goat meat are then shared out in order of seniority to those present.

Once this is done, that would have concluded the burial rites in Igboland, for a titled man.

Many observe this, and many don’t. It is a case of each and his belief.