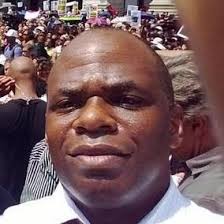 I watched a Video that gave me goose pimples, set my teeth on edge and brought back unforgivable memories..

It was a Video of group of Young Men wearing Black camouflage shared on Facebook, and it was said to be the Militia Nnamdi trained as South East Security Network (ESN) just like the Amotekun of the West and series of others in the North.

I know many of his followers are with Very Hot blood and they can’t reason with anybody or likes to be corrected, which also is fears of many people from South East , since they can’t be reasoned with, what they will become if given such unchecked powers that include the lives of us and they having weapons at their disposals is the main reason many will never be comfortable with arrangement shrouded around them.

They always think that in the event of having Biafra, that they are number one citizens, while the rest are infidels, they created a serious ism and schism which breeds fear and alienate them from supposed members of the Nation they project.. A method that must be changed, to have an impact on people and minds..

May be he wasn’t aware that “Nwanyi choba Nwunye edi ya okwu, osi ya nye ya Nmanu ka owelu ta Akwu Ojukwu *(When a quarrelsome Wife wants altarcation with step wife, she will demand Palm oil to be used in eating Palm Nut called Ojukwu which produces the best of same Oil).

If it eluded him, he should remember they have killed us for less crime and they always want provocation, so they can spill more of our blood and the best we can do is to shout and call on UNITED NATION, which we know are deaf and dumb when it comes to Africa or her litany of problems but during the carnage of 1967 there was this advise which says “One Ndiro gbalu gburugburu na Eche Ndi ya Nche, mgbe nile” .. Moving on..

My business is not that of the West or South, but that of our own hood (Alaigbo) because from all indication today, everything has gone Tribalistic, and we should know that it pays to weight options so that previous expirince will serve as our teacher and Guard, so we can err at the side of caution…

Read my Lips, what other tribes does and get laughed over, if we try same, they match down Military and when they come, they kill our Youths in thousands and life goes on, then the bereaved will be consoled with Ndo, as if Ndo will give them a replacement Children, which calls for “Onye Ndiro gbalu gburugburu once again”.. .

I know many of his Cult followers won’t cool down to read this, but this is more of present and inevitable danger, so we must start a search for the missing Black GOAT while the day is bright, as when it is Dark, it will simply be assimilated with the darkness and finding such become a Mirage.

During the days when ABA were bedlock of Robbers, they robbed so hard and provoke the Shoe Makers to Form a security outfit called BAKASSI which helped to sanitize Aba, perish those Robbers and Anambra states reached out and imported them to battle our own scourge.

They came with lots of fanfare , they also clean the Extra proud Robbers that took over the state and most of South East , but…..

Less than a year along the line, they became Horror that terrifies Terror, they terrified and haunted the land so much that nobody was safe again and everybody wants an end to the once Loved outfit because they changed to a Menace..

The evil that was used in triumphant to oust our Thieves turned around to serve as Albatross..

In the days of Massob, they became more lethal than Herdsmen, they decides who starts Building house at 33 in and many places in ONUICHA, they forced Landlords to accept 2,000 Naira as House rent from Tenants , the rest given to them as Ndi Massob, if you dare say No, they will beat you inches to your death..

They formed securities that harrass all streets and tell each house how much they must be paying as Dues to support them..

If you buy a Car, they task you how much you should be paying as insurance to them and they no Born you well to negotiate or decline, it was a Caliphate of the doomed ..

It was a terrible period, but once the town were liberated of those terror that came as Freedom fighters, but turned out as Freedom takers , people forgot the Pains they passed through them ..

This time we can’t open our Eyes and restart a Monstrous exercise that will wipe us away from within.

If you want to know how this will end, just say something as correctional measure that is in conflict with the Lord they worship said through Radio or any of his autocratic method , He thinks that everybody must Kow tow or get run out of town..

When you do so, just relax for 20 Minutes and see how many insults they will haul at you, how many death threats will accompany it and notice that not even one dissent voice will say from within them , let’s hear him out or consider his own version.. Or let’s reason as Brothers, they only believe, it is either you accept them verbatim or they crush you with words and act.

If they can be intolerant over an opinion shared on Social Media, imagine what they will do if they have the powers to maim or destroy..then they will rape your household and demand you pay them for doing you that honors.. Moving on..

The reason they poscribe IPOB and not Herdsmen or BH is to have enough reason to make shooting target of the boys who pledge allegiance to the Sect , so we must not hand over the lives of our Youths to be wasted for Utopian ejaculation.

The RASCALITY of the boy who wants to lead this group will always enjoy seeing our Lands terrified, as he won’t be around to join us in the penury the unmitigated disaster will spew..

Point to Note… This Boys can be useful but with eludite directions, thoughts tutored and efforts guided with precision. But leaving them under the direction of one who is not circumspential means disaster..

South East should have a unified Security outfit, but not one headed by a boy who loves to Lord over everybody..the Government should do it for proper direction and coordination..

NDIGBO have the right to start an outfit, but are we ready for the consequences which may include another invasion of our peaceful land and render same into Ruins..

If we fall into this trance of NNAMDI, be rest assured that Herdsmen will be friendlier than what we get.. After all Ana esi na isi aru ama Uto Nsi..

Good Morning Umunne and I sit by the brooks to imagine the insults they will throw at me, but my problem is much more than having tantrums thrown, but getting our lives secured in a worthy environment.

I am LAST BORN MPA NNUKWU and I come to make Common sense.. Mazi Odera