Home Nigeria News Controversy as IBB denies asking Buhari not to recontest in another open... 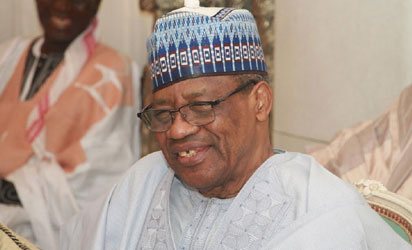 Controversy as another letter has been reported to have emanated from the camp of former Military President, Ibrahim Babaginda, saying that he denounced his initial letter where he said that President Muhammadu Buhari should not contest for 2019 election saying that ‘the next election in 2019 therefore presents us a unique opportunity to reinvent the will and provoke fresh leadership that would immediately begin the process of healing the wounds in the land and ensuring that the wishes and aspirations of the people are realized in building and sustaining national cohesion and consensus.

Former Head of State, Gen. Ibrahim Babangida during prayers to mark his 75th birthday celebration at the Hilltop, Minna, Niger State ‘I pray the Almighty Allah grant us the gift of good life to witness that glorious dawn in 2019. Amen. I have not written an open letter to the President, I have just shared my thoughts with fellow compatriots on the need to enthrone younger blood into the mainstream of our political leadership starting from 2019.’

But in the new letter Babangida denounced the initial letter saying that it is untrue, it is in its entirety, an inaccurate representation of his view of the state of our dear Nation.

Below is the new letter:

My attention has been drawn to a report making rounds especially online in which I was quoted as advising Nigerians not to vote for President Muhammadu Buhari in the coming 2019 election. Not only is the said statement untrue, it is in its entirety, an inaccurate representation of my view of the state of our dear Nation. As a former President and an elder statesman, I have existing communication channels through which I reach out to President Muhammadu Buhari on topical issues of national importance, should there be the need so to do.

The media, both online or mainstream and indeed the unsuspecting public are advised to disregard such false reports.

Thank you and God Bless you all.