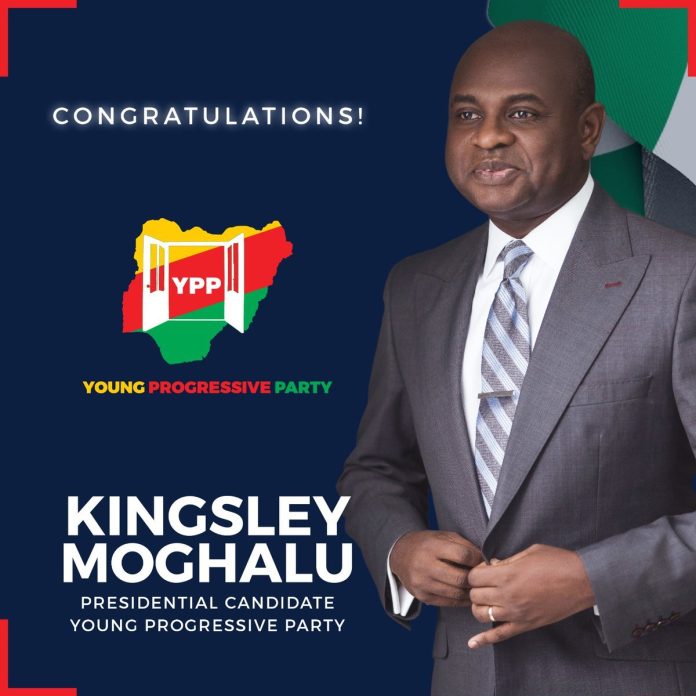 2019 Presidential election is a vote to chose between your freedom or continuous slavery in Nigeria.

Kingsley Moghalu Wins Young Progressive Party’s Presidential Primary Ticket, Says
Campaign is to “Build a Nation”
Professor Kingsley Moghalu, former Deputy Governor of the Central Bank of Nigeria, today emerged winner of the Young
Progressive Party (YPP) presidential ticket for the 2019 elections during the party’s national convention and presidential
primaries, which held in Abuja on Saturday, 8 September, 2018. With other candidates for the party’s nomination stepping
down from the race on the eve of the convention, the former United Nations official was officially declared the party’s
flagbearer to contest for the Nigerian presidency against the incumbent, President Muhammadu Buhari on 16 February, 2019
and other candidates.
Speaking after the primaries, Professor Moghalu stressed the importance of putting the concerns of Nigerians at the forefront
of the political debate. Moghalu said that the 2019 election will be “a choice between freedom and slavery under our current
political class, between poverty and real prosperity for Nigerians, and between stability and continuing instability of our
country.”
“Right now, our politicians, having fed fat on our resources, are exercising by practicing ‘jumpology’, jumping between the APC
and the PDP—which only tells us one thing: that neither party nor people matter. In the end, all they care about is what is best
for their pockets or their safety from prosecution. It is up to us to make the case that their way does not work anymore; that it
has only left us in poverty and insecurity; that it has led to many fleeing this country because they feel there is nothing for
them and their children here,” said Moghalu.
The candidate also emphasized the need for Nigerians to ignore the prevalent thinking that things cannot get better, or
wishing for political messiahs who promise to set everything right, stating that there are no magic wands but just him, the
members of the Young Progressive Party and every Nigerian working to truly transform Nigeria.
ABOUT KINGSLEY MOGHALU
Kingsley Chiedu Moghalu, a lawyer and political economist, was a Professor of Practice in International Business
and Public Policy at The Fletcher School of Law and Diplomacy at Tufts University from 2015-2017.
As a Deputy Governor of the Central Bank of Nigeria from 2009 to 2014, Moghalu led the execution of extensive
reforms in the country’s banking system after the global financial crisis. He was a member of the Bank’s Monetary
Policy Committee that brought inflation down to single digits.
A global leader with an extensive track record of leadership, Professor Moghalu has made contributions to the
stability, progress and wealth of nations and communities across academia, economic policy, entrepreneurship,
diplomacy and more. He has taught and inspired citizens from more than 40 countries in North America, Europe,
Africa and Asia, mentoring men and women for leadership roles in business, military intelligence, non-profits, andHe also served as the chairperson of the board of directors of the Nigerian-Export-Import Bank (NEXIM) and the
Financial Institutions Training Centre. He was also a member of the boards of directors of the Central Bank of
Nigeria, the Securities and Exchange Commission of Nigeria, the Asset Management Corporation of Nigeria, and
the global Alliance for Financial Inclusion (AFI).
Signed
Jide Akintunde
Official Spokesman for YPP Presidential Candidate,
Professor Kingsley Moghalu and his
To Build A Nation (TBAN) movement.