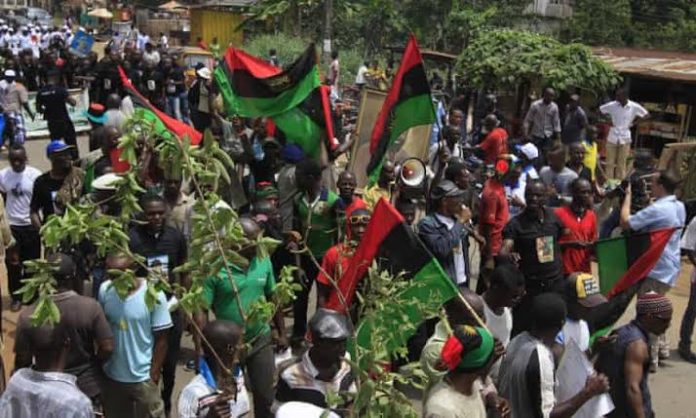 The chairman implementation committee, Alhaji Mujahid Asari Dokubo (Ediabali 1 of Kalabari ) has stated that the newly declared De Facto Customary government of Biafra shall bring the leadership of Bim-Massob on board especially on foreign Mission.

Asari Dokubo stated this through the Deputy Chairperson to Biafra De Facto Customary Government implementation committee, Nwada Eberechukwu Anigbogu(Ada Biafra) who came along with the De Biafra Mobilizers Initiative at Biafra seat of power, Auditorium of Ojukwu Memorial Library complex, Owerri on their solidarity visit to Biafra internal government runs by Bim-Massob in order to officially pay homage to father of Biafra nation, chief (Dr.) Ralph Uwazuruike as our father in the struggle.

“We are here today to pay homage to the seat of Biafra Government. There cannot be any mention of Biafra without recognizing Ojukwu immediate successor, Chief Ralph Uwazuruike for his blessings and support, Rita Anigbogu expressed.

She added that there is no doubt that the structures, experiences and contact created and preserved by chief Uwazuruike in the past two decades would be essential to the success of the new De Facto Customary Government of Biafra’s peoples.

“Chief Uwazuruike’s contributions to this modern Biafra agitation is immense and highly commendable. We not only recognise and appreciate this but the global community also recognises and respects him.

“His address in defence of Biafra sovereignty before the global body of the UNPO( Unrepresented Nations and Peoples Organization) on August 31st 2020 is still fresh in our memory. We watched him live and he made us proud, Ada Biafra added.
On listing the achievements of Bim-Massob that gave Biafra a foothold even at the international level by the Biafra De Facto Customary Government which include setting up of Biafra internal government here at home, construction of impossible edifice… Ojukwu Memorial Library Complex, construction of Secretariat complex at different zones in Biafra land, ongoing construction of world class Homeland University at Okigwe, ongoing construction of world class Homeland University Teaching Hospital, ongoing construction of Homeland international stadium, provision of security to our people, setting up of FM radio station, pursing our independence Quest through nonviolence method and rule of law and solidarity visitations of ethnic nationalities in Nigeria last year that further made it clear that no ethnic group in Nigeria is still interested in the entity called Nigeria.

They also acknowledged the worthy foreign representatives of Bim-Massob in the person of Ikenna Obibi Egeonu and Uduogu Nwanyinya for their tremendous role in the reconciliation and unity of almost all the pro-Biafra groups which gave birth to Biafra De Facto Customary Government.

At the same time, they pledged to seek advice from Chief Ralph Uwazuruike’s wealth of wisdom and experience. We shall always adopt his non-violence philosophy. They also thank Uwazuruike for seeing the qualities in Asari Dokubo in nominating him as Chairman of the Biafra De Facto Customary Government because Bim-Massob is a force that cannot be ignored rather it’s a force to reckon with, indeed the first among equals.

On the final note, Uwazuruike throws his support 100% to Biafra De Facto Customary government as they made their stand that Biafra freedom is not negotiable. No retreat, no surrender. For us, there is no going back it is forward ever, backward never.