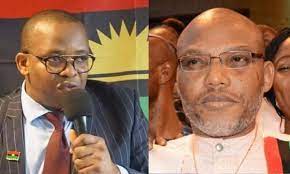 Biafrans Must Not Be The Ones To Wilfully Spill Biafran Blood On Biafran Soil – Ex-IPOB Deputy, Uche Mefor

We shall continue to state the obvious:

War is the last undesirable option for us, Biafrans. We should boldly and courageously profess this but must not run away if one is brought to us due to no fault of ours. Even at that, we must choose carefully and wisely too.

As other parts of Nigeria are imploding, Biafraland must be insulated from it and protected by Biafrans themselves because of our unique experiences in the past. Let this ugly history not repeat itself again in our time.The war of the 1960’s was unprepared as it was brought to us but that generation fought gallantly and made their marks regardless because they consulted, collaborated and overwhelmingly agreed within the limited time left for them.

This time around, we must not be the ones to rush into the unprepared war or hostility ourselves unless brought to us like in the 60’s in which case we would be forced to defend ourselves. Still, it remains an expensive venture——must not be done unilaterally (if success is to be assured), rather it should be a collective endeavour. Humanitarian considerations, air, land and sea access and defensive strategies must be brought into immediate and reasonable purview of contemplatiion. And with the uncertainty and its inevitability increasingly stares the Nigerian state in the face, our own priorities should also be to equip ourselves, conserve energy and what we have and not the other way round. Be vigilant, consult, collaborate,synergize , wait for any eventual aggression by the enemy aggressors and not us to be the ones to be destabilising Biafraland and killing Biafrans of any shape with impunity as we see it today. That is a self-destructive strategy and tactics that must be discouraged , changed and jettisoned.