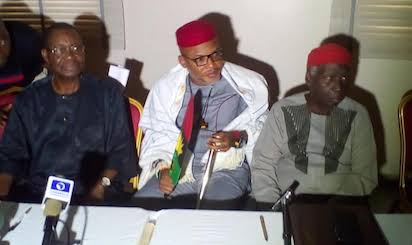 As part of the ongoing consultations towards meeting the demands of Biafra agitators lead­ership of Alaigbo Development Foundation ( ADF) Monday , met with the Leader of the Indig­enous Peoples of Biafra ( IPOB) in Owerri Imo State.

This is coming barely a week after the IPOB Leader had a similar parley with South East Governors in Enugu. ADF is a pan Igbo group which comprises accomplished Igbo personalities , professionals, academics and the intelligentsia both home and abroad who are vigorously pursuing the Igbo cause. The group had penultimate week, petitioned the United Na­tions over the genocidal quit notice by Arewa youths to Igbo living in the North as well as the Igbo hate song, accusing the fed­eral government of docility and maintaining criminal silence.

According to Kanu, the ADF delegation was led by its Nation­al President, Professor Uzodin­ma Nwala, while Kanu led the top hierarchy of IPOB to the par­ley which lasted for about three hours. Speaking exclusively to The AUTHORITY yesterday in Umuahia on the outcome of the meeting, Kanu said ?it was a family meeting?, adding that ?I told them that I will update them periodically on what we are do­ing?.

Kanu expressed delight that the Igbo elite had woken from their slumber and come to terms with the realities over the need for the race to unite and take their destiny in their hands. ?I am glad that the elite are coming on board. We are all elite including the carpenter and the mechanic by the road side who have understanding of the times.

As long as they can make sense and articulate their viewpoints and channel it towards emanci­pating our people. ?Elitism is not purely on aca­demics; it has to do with being able to articulate a sense of pur­pose for a people and pursuing it doggedly.? Prodded further to expatiate on the agenda of the meeting, Kanu simply said ?it was a family meeting and not for public con­sumption?, but added that it was very fruitful. The IPOB leader said that the outcome of the meeting ?will guide us in our efforts towards restoring Biafra?.

On what he discussed with South East Governors, Kanu said he put his demands to them for onward transmission to the Fed­eral Government. He vowed never to compro­mise his stance on the indepen­dence of Biafra which he said was non- negotiable as any other thing to the contrary would amount to betrayal. His words: ?I laid down be­fore the governors what we want from the federal government, and that is the restoration of the republic of Biafra. ?Nothing has changed; our position is still the same. What we want is referendum on Bi­afra.

We have told them what we want, and we cannot compro­mise that position. ?So, let them convey same to the federal government. No more no less?. Kanu noted that although he had respect for elders , ? no amount of pressure or persua­sion? would make him drop the agitation for Biafra because that is why I was born.? He enjoined ?Biafrans all over the world to remain resolute, determined and focused on the struggle expressing the confi­dence that Biafra would soon be realised. He insisted on boycotting the November 18 Governorship election in Anambra, saying that henceforth there will be no more elections in any Biafra soil until the Federal Government con­ducts referendum on Biafra. On the media reports that he had gone underground follow­ing moves by the Federal Gov­ernment to re-arrest him, Kanu declared that he would never go into hiding because he was never moved by threats. ?Am not me afraid of them?, he raged, adding that ? the media should not be reporting false­hood but should remain objec­tive and accurate in their report­age of events.? He said ?there is no way a per­son of my status and position will go underground.

It is not possible. I lead from the front. I announced my arrival into Nige­ria and I came. I am not afraid of anybody and can never be.?