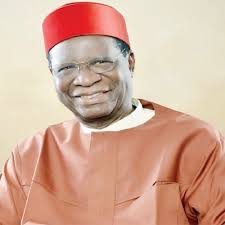 A former Chairman of Police Service Commission, Chief Simon Okeke, has told former Governor Peter Obi of Anambra State and his successor, Willie Obiano, to settle their differences out of public domain instead of ‘washing their dirty linen in the public’.

He condemned the ‘embarrassment’ generated by their claims and counter claims. He said he wondered whether former Governor Obi wanted to be the godfather of Anambra politics.

The former police boss said at the age of 80, he has no more interest in partisan politics but would only offer advice as an elder statesman.

“I rallied the Anambra people at Chelsea Hotel, Abuja and the entire executive members of the All Progressives Grand Alliance (APGA) led by himself, Chief Victor Umeh, Tim Menakaya, Uche Ekwunife and many others gathered. It was there that Obi raised the hand of Obiano and declared him tested and trusted person to take over from him. He appealed for support for Obiano. On that ground I called all Anambra people living in Abuja to go home enmass and vote accordingly. I told them that Obi had done well and the man he presented to us as tested and trusted should be voted for. Even though I was a Peoples Democratic Party (PDP) member then, ours is ours,” Chief Okeke said.

He noted that it was shocking that within one month or so of Obiano’s take over there came up stories of discord between him and Mr Obi.

“Here is a man he said is tested and trusted. If indeed he is asking Obiano to pay him N7 billion because Obiano is now untested and untrusted and Obiano could not then there is a big question mark on the ex-Governor. I do not know whether Obi really demanded that or not because I was not there. I expect that Obi would have called us again to tell us that he no longer trusted this man. If Obiano has committed an offence against the State, I will be the first person to cast my vote against him. But as at today, I have not heard that Obiano committed a fraud to the magnitude to be voted out.

Okeke was of the view that if Obi had reached an agreement with Obiano to lend him N7 billion for an election signed and sealed, that it would have been a different thing. He said Obiano would have to pay that but not from Anambra purse. He told the duo to settle the matter outside the people’s view.

He noted that Governor Obiano had performed excellently to deserve a second tenure. He mentioned security as a major breakthrough of Obiano’s administration.

He also said it would be rational, cost effective and would lesson tension to allow Governor Obiano to complete his two tenures instead of dissipating energy to shop for replacement.