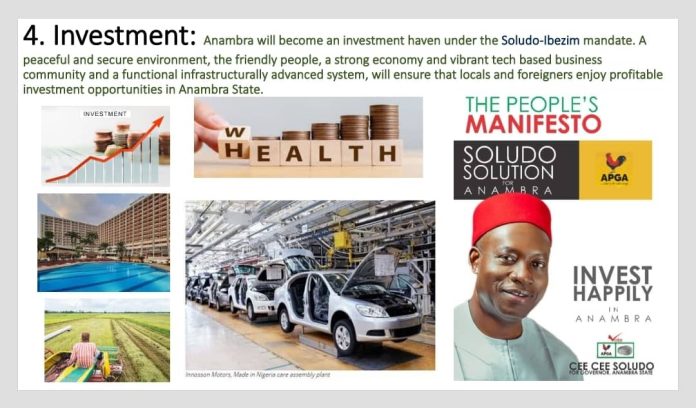 Exciting times are indeed here as Prof Chukwuma Charles Soludo, the All Progressives Grand Alliance (APGA), gubernatorial candidate consolidates firmly on his electioneering campaign as he journeyed towards Agu Awka 2022 in style and glitz

Cee Cee Soludo has remained firm, solid and unshaken as he continues to reach out to the grassroots. At the last count, he remains the only candidate to have campaigned in six local government areas, bonding with the people and delivery messages of action, while others are yet to flag-off their campaign rally.

The All Progressives Grand Alliance party has shown beyond all reasonable doubts, that it is the party fully on ground in Anambra State. The party has continued to receive massive grassroots support all over the 21 LGAs and the 326 wards in the state.

As the Soludo campaign train moves from one local government to another in electrifying fashion, the people are coming out in their thousands to support and identify with the man that is about to revolutionize the state

His campaign message has been crisp, direct and infectious. The people believe him. And they are poised to deliver their votes for him come November 6, 2021. Even, school children are not left out.

This experience, no doubt, would have meant so much for Soludo. For a man who loves and cherishes children, this would further spur him on to do more in the areas of giving qualitative education to every child in Anambra State. Though, he has already promised that Anambra will be the “digital tribe” in Nigeria and very child born in the state will key into the digital age so that they can compete favourable in the emerging digital world

On campaign ground, Soludo messages are not mere campaign rhetorics, but well couched messages anchored on what is feasible and achievable.

Every of his campaign message has been carefully thought through. Problems and challenges are identified and solutions are proffered. His messages are delivered in clear, unambiguous words. And the people see through his honesty and determination to effect dramatic changes in their lives. As he speaks to them, they cheer and yell in return: Odenigbo! Dike-Udo! Solution!

In his campaign message, Soludo has told Ndi Anambra that he will create 130,000 private sector led jobs annually and 1000 youth millionaires yearly as well. He assured that it will be job! job! job! for the people. He added no youth of Anambra extraction will have any incentive to seek greener pastures in Lagos or Abuja anymore, as Anambra will be developed as a prosperous homeland where the world will come to work, live, invest, learn and enjoy!

Governor Willie Obiano, the dynamic working governor of Anambra State has also attested to Cee Cee Soludo’s unassailable intergrity. And he has equally assured the people that every word Soludo has spoken will be fulfilled.

Indeed, Ndi Anambra has been extremely lucky with an Obiano as Governor and could even be luckier with a Soludo as a successor!

Let every Ndi Anambra come out enmasse and vote overwhelming for the Soludo/Ibezim ticket come November 6, 2021. This is the only viable option for a greater and prosperous Anambra State !