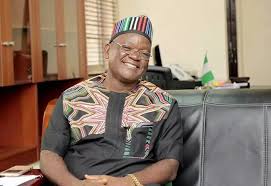 The Benue State Governor, Samuel Ortom, on Wednesday accused the Minister of Special Duties and Intergovernmental Affairs, Senator George Akume, of being a sell-out.

He also threatened to sue the minister for defamation.

He was responding to allegations of malfeasance levelled against him by the minister at a press conference in Abuja on Monday.

The governor described Akume’s allegations as “unfortunate and amounts to a betrayal, back-stabbing, double-crossing, selling out of Benue people, treachery, greed, unfaithfulness and falsehood.”

The governor dismissed the minister’s allegations as lies.

Ortom said, “The Minister for Special Duties and Intergovernmental Affairs, Senator George Akume levelled several allegations of killings and several others against me. I do not want to join issues with him. But I have the mandatory right to put the records straight.

“I want to say that all that Akume said were just mere lies just for him to secure his meal ticket from his paymasters but I will not be deterred.

“I remain committed to the people that gave me their mandate to lead them. My first commitment is to the people, all politics is local. My locality is Benue State and not Abuja.

To send the message to the entire world, I decided to do something so that Akume will justify or prove all those allegations that he put out to defame me and give me a bad name. He will prove all his allegations before a law court for the world to know who is telling the truth.”

Akume had at a press conference in Abuja, on Monday, accused the governor of “corruption, ineptitude and disrespect to the president.” He also called for a declaration of a state of emergency in the state.

The minister also alleged that over N500bn accrued to the state from federal allocation since Ortom took office.

Meanwhile, the state chapter of the PDP, said contrary to claims by its All Progressives Congress counterpart, Ortom had a lot of respect for the President, Major General Muhammadu Buhari (retd.)

State chairman of the party, John Ngbede, said this at a press conference at the party secretariat, in Makurdi.

He said, “Governor Samuel Ortom has tremendous respect but this respect cannot exempt the President from discharging his constitutional responsibilities or the governor from respectfully calling on him to live up to the duties of his office.”