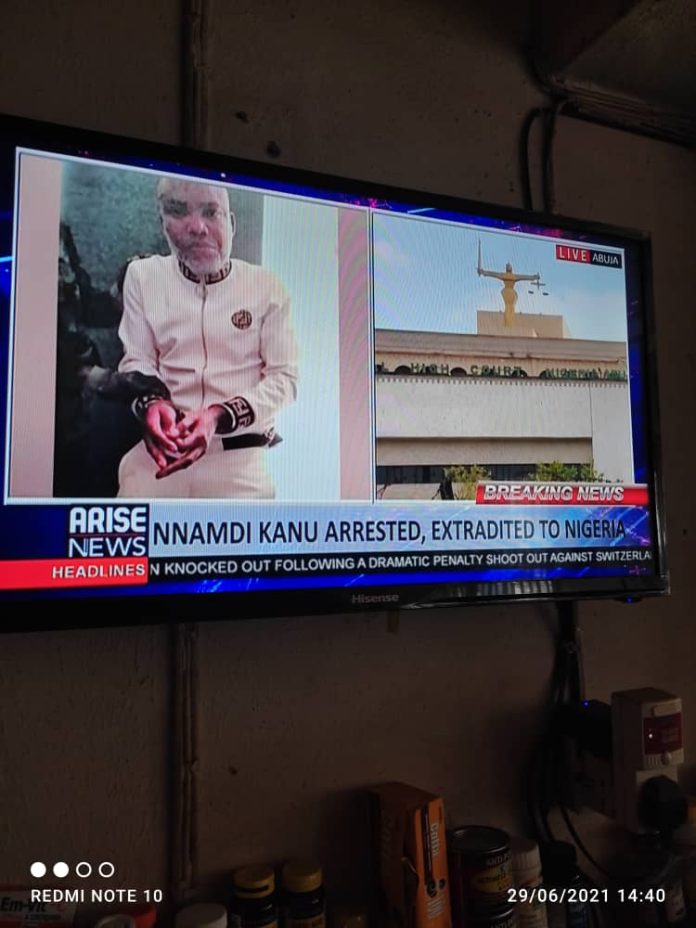 The leader of Indigenous People Of Biafra, IPOB, Nnamdi Kanu on Tuesday, opened up on why he escaped from the country inspite of the criminal charges of terrorism and treasonable felony brought against him by the federal government

Looking heavily weighed down, Kanu, who was brought to court for the continuation of trial shortly after he was intercepted by security operations, sought the permission of Justice Binta Nyako to address the court and present his side of the story.

Upon the permission, Kanu told the court in the presence of heavily armed security operatives that his house was unlawfully invaded by security men with his life seriously threatened.

Nnamdi Kanu further alleged that he would have been killed along with others on the day of the invasion if not for the wisdom he applied to jump out of the country.

Kanu’s reaction was provoked by the federal government’s information through its counsel, Shuaib Labaran that Kanu jumped the bail granted by the court to escape trial by running out of the country.
Labaran had applied to the court for an order to remand Kanu in the custody of the Department of State Service (DSS).

The counsel said the request became imperative because lawyers to Kanu were yet to be abreast of his re-arrest.

Justice Binta Nyako granted the request and ordered that Kanu be remanded in the custody of DSS till July 26 for the continuation of his trial.

Although the continuation of trial was originally slated for October 20, 2021, it was brought downward to July 26, 2021, for his lawyers to appear for his defense.

Kanu appeared to have been given the VIP treatment while being moved out of court.

He was taken away in handcuffs through a special gate reserved for Judges and highly placed persons from where he was moved to the DSS detention centre.

Hordes of photographers and cameramen who had positioned themselves to take his photographs were disappointed upon discovery that Kanu had been taken away.

Meanwhile ,reports have it that Nnamdi Kanu travelled from England to Singapore before heading to Czech Republic on Friday where he was arrested.

With the tip off from the Czech Republic officials to Nigeria government, the IPOB leader was arrested on Saturday in Prague,  Czech Republic.