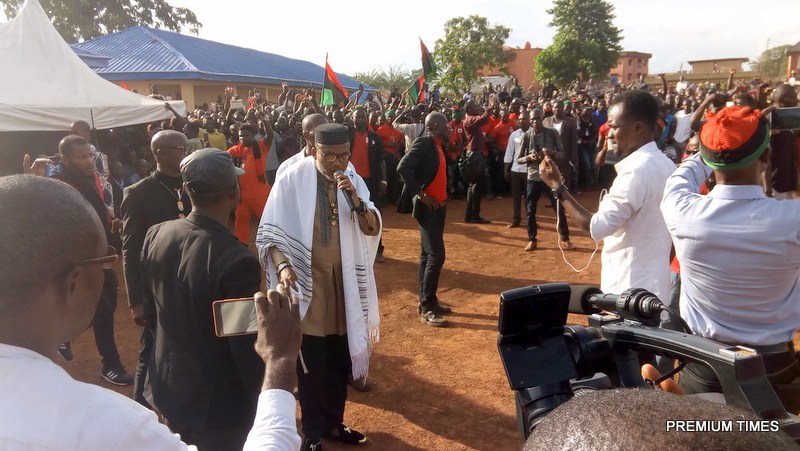 United States of America media giant, the Washington Times has slammed the Indigenous People Of Biafra (IPOB), describing it as terrorist organization

In the op-ed, Ivan Sascha Sheehan wondered why the violent secessionist group in question – the Indigenous People of Biafra (IPOB) – is yet to be designated a Foreign Terrorist Organization (FTO) by the US Department of State despite repeated pleas to do so by longstanding U.S. ally Nigeria, where IPOB is based and carries out its murderous activities.

Below is the full commentary:

So how did it happen?

The answer is frustratingly simple. The violent secessionist group in question – the Indigenous People of Biafra (IPOB) – is yet to be designated a Foreign Terrorist Organization (FTO) by the US Department of State. This is despite repeated pleas to do so by longstanding U.S. ally Nigeria, where IPOB is based and carries out its murderous activities.

It is difficult to explain how U.S. interests are served by inaction and complacency on IPOB. The listing costs nothing. But the designation would have significant implications for the group’s continuance.

Let’s start with the obvious: Tagging the group with a terror label would hit IPOB’s wallet hard.

As soon as the designation is applied, no organization that utilizes U.S. currency would be able to legally conduct transactions with the organization. By cutting off IPOB’s funding, the U.S. would weaken the 50,000 strong paramilitary outfit and provide Nigeria’s security forces room to train their sights squarely on ISIS-affiliated Boko Haram in the Northeast of the country. Counterterrorism operations against Boko Haram have long been assisted by U.S. agencies working in close coordination with the West African government.

Though IPOB may appear to be Abuja’s problem alone, the militants have served as a distraction and bled precious resources. Over the past eighteen months, Boko Haram has regrettably been able to regroup and rejuvenate. The same is true of Al Qaeda-affiliated groups across the volatile Sahel region. That the African continent is rapidly becoming a staging ground for global terror operations should concern U.S. officials.

But Nnamdi Kanu, IPOB’s leader, is clearly unconcerned. That he feels no need to even disguise his support of terrorism is worrisome. Though IPOB’s principal aim is to restore a breakaway state of Biafra in the Southeastern parts of Nigeria, Mr. Kanu’s rhetoric has become increasingly strident. “I don’t want peaceful actualization (of Biafra),” Mr. Kanu has said through his Radio Biafra channel, used to project threats, instructions, and propaganda into Nigeria from the safety of London. “If they don’t (give us Biafra), they will die.”

Neither does Mr. Kanu make idle threats. The December revelation of IPOB’s 50,000 strong-armed paramilitary wing, the Eastern Security Network (ESN), complete with a Swastika-style flag, marked the end to all pretenses of being a peaceful movement. What had been largely unspoken was publicly declared. Since then, violent IPOB attacks on both security personnel and civilians have surged by a terrifying 59%; deaths by 344%.

More than 20 attacks were carried out in the first three months of this year alone, including the retribution-style bombing of a local state governor’s home where four were killed, and an attack on a prison that freed some 2,000 dangerous criminals. Even neighboring states were forced to impose curfews to protect their citizens from marauders.

There is also a nasty racial element to the IPOB attacks. In addition to attacks on the state, much of their violence is directed towards the Fulani people, a nomadic tribe of herders that roam across West Africa. Through Biafra Radio, IPOB regularly calls on its supporters to not only kill the Fulani, but to kill “any landlord that gives accommodation or rents his house or her house to a Fulani person.” In one recent attack on a Fulani community, six young children were butchered with machetes – one, a baby, was burned alive. Their bodies were discarded in mass graves.

Whether with threats made on Biafra Radio or repeated acts of violence, IPOB coerces politicians and civilians to acquiesce to its radical political demands. One example saw all the governors of Southeast Nigeria bow to a 14-day ultimatum to ban open grazing in their districts – a move targeting the livelihoods of the Fulani – rather than face the wrath of the ESN. Similarly, it enforces a sit-at-home day every Monday, intended to economically cripple the region, through acts like the torching of passenger buses.

The U.S. has correctly prescribed terror labels to other secessionist groups that employ these tactics – the ETA in Spain, the Tamil Tigers in Sri Lanka, and the PKK in Turkey. Now the people IPOB claims to represent, the Igbo, are even seeking to distance themselves from the group.

One reason may be the group’s million-dollar contracts with prominent American lobbying firms paid to whitewash the group’s reputation and lobby on Capitol Hill. It is impossible to believe that IPOB and Kanu’s deep pockets are not being lined by external organizations.

A terror designation would put a stop to this influence peddling. It would also mean the group could not use the US or its Western allies, like London-based Radio Biafra, to further their cause. The group’s outsized influence – a function of its radio station, paid hands, and US lawyers – would be severely curtailed. Law enforcement in the US, the U.K., and elsewhere would be obligated to act by shutting down these activities.

That a small terrorist organization can bully senior U.S. officials in American courts and leverage the influence of foreign agents to challenge an ally’s security would be laughable were it not so alarming.

Washington must not ignore Nigeria’s terrorists any longer.