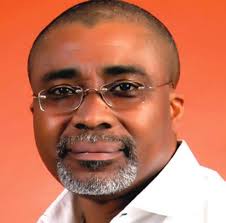 A claim to be “made in Aba” would be a claim to represent the ethos of a people who are  enterprising, dogged, driven by the need to bring about change and ever resilient in their pursuit for improvement. To be made in Aba you’d have to earn it as it goes beyond fancy talk. Made in Aba is a brand that has over the years, been associated with men of integrity like John Udeagbala of J.U. Udeagbala Holding, Chief Anthony Enukene of Tonimas, and Mazi Clement Owunna of Starline, all great men who have left legacies and added value to the city, providing jobs and contributing to development.

Made in Aba is a badge of honour that cannot be associated with pathetic hometown fabulists like Enyinnaya Abaribe.

Let’s talk about Enyinnaya Abaribe for another hot second; a man who chose to malign Sen. Orji Kalu in the pages of his wrongly titled book, MADE IN ABA.

The writer recalls that several years ago, Enyinnaya Abaribe, stranded at a Lagos motor park, was offered the position of deputy governor of Abia State on a platter of gold by Sen. Orji Kalu after he was given a free ride to Aba by the then aspiring gubernatorial candidate. As a running mate, Abaribe benefited from a free election campaign and fully paid election implementation that allowed him to occupy the second highest seat of Abia State.

The revenue generation of any government is given to the most trusted ally to handle because in it lies the life blood of that government. In a leap of faith and a clear expression of trust, as Abia governor, Sen. Orji Kalu entrusted his deputy, Enyinnaya Abaribe, with overseeing the revenue generation efforts of the state. This was a clear departure from the norm of keeping deputy governors as ceremonial figureheads only.

As the man in charge of the purse of the state, Enyinnaya Abaribe had a sacred duty, not just to Abia state as a whole, but especially to Aba. This is because Aba was the main revenue generating center of the state and also the city with the most government infrastructure and highest population of Abians to be serviced with the generated revenue. Alas, what did the Umuekwensu (children of the devil) son of Obingwa do with the yam belonging to Aba people, hung on his neck like the proverbial goat? He started eating it forgetting who it belonged to. Like a Judas, instead of focusing on the best strategies to achieve the task given to him, he devoted his energies to raising alternative receipt booklets for the internally generated revenue of the State (as testified by the Governor Orji Kalu himself in his tell-all book, “My Life”). For Enyinnaya Abaribe, the final destination of generated revenue was to his private pocket and not for the challenges Aba was facing at that time. Which is why it was a no-brainer that Enyinnaya Abaribe was infamously impeached for fraudulent activities. Till date all access he has to the common wealth of the people has ended up in his private account and he is yet to prove pages 214 and 215 of “My life“ by Orji Kalu wrong.

People made in Aba do not steal from the commonwealth of Aba people. There is a distinction between made by Aba, made from Aba, made for Aba, made with Aba and made in Aba. Enyinnaya Abaribe is far from the last but could be better described by his own words on one occasion “I am made with Aba”. To this the writer fully agrees that there is no better description for his book than “MADE WITH ABA”.

To be made with Aba means that the resources of Aba meant for Aba people were used up in the making of one man. This is the best description considering that few months before he was chosen to be deputy Governor, he was struggling to raise money to run for state house of assembly with nothing to show for all his eloquence as a lecturer.

When you are made in Aba, you are Aba’s product because Aba will own you, enjoy your quality, defend you, promote you and market you to others outside Aba to embrace you as a proven quality product. But when you are made with Aba, it means you took from Aba; it means you denied Aba what belongs to them; it means you suppressed Aba to enrich yourself like the bourgeois in the ancient times against the commoners. Because how else do you explain a man who has served 16 years as a Senator representing Abia South Senatorial Zone which includes Aba North and South with nothing to show for it? Even as a principal officer of the Senate?

It is unconscionable and quite frankly asinine that while Aba people are still seeking answers for his gross underrepresentation, he published a self fellating book titled Made in Aba. No! Enyinnaya is not made in Aba. He is a product of Umuekwensu in Obingwa LGA but made with the resources meant for ndi Aba. A performance comparison of his 16 years as senator with the one year, eight months of Senator Orji Kalu, his benefactor whom he attacked in his book, will leave you in a perpetual state of “Omo!”, like the Yoruba people say. Omo, how is it that from Ngwa road to Ikot Ekpene road or from Ogbor hill to Ariaria there is absolutely nothing to show for Abaribe’s 16 years in the Senate? Meanwhile, in barely one year of office, Senator Orji Kalu has diligently attracted federal resources to build roads, capital projects and other interventions to better the lives of the people of Abia North? One does not even need to go as far as visiting Umuekwensu, Abaribe’s place in Obingwa, to catalogue the woes of his kinsmen including those living on the same road to his country home. You cannot be an Aba hater and at the same time claim you are made in Aba.

In Abaribe’s dishonest book, the writer expected to see a refutation of the positions taken by Orji Kalu on pages 214 and 215 of his book. However, the writer was not surprised by Abaribe’s unintelligent rebuttal choosing to attack Senator Orji Kalu’s family members instead of addressing the allegations of his fraudulence. Enyinnaya Abaribe should tell the people of Aba and Abia, with facts, that he did not divert and attempt to further divert the internally generated revenue of Abia State for which he was caught and shown the way out by the House of Assembly through impeachment.

It is not surprising to hear several claims by Ngwa boys that they were hired and equipped by Abaribe with arms during elections but later abandoned after electoral victory. Afterall, a few years ago the press reported that Abaribe was seen with a gun in the hallowed state cabinet chamber attempting to threaten Senator Orji Kalu. Of course, Abaribe’s ego massaging book did everything but comprehensively address that allegation.

The writer invites Enyinnaya Abaribe to address the issues raised and stop playing to the gallery. The writer recommends the fitting title of “MADE WITH ABA” whenever Abaribe summons the courage to publish a properly written volume 2. Until then, Enyinnaya Abaribe has failed to convince the readers that “Sen Orji Kalu’s mother took him to the prophet, and other silly claims” in his tabloid of a novel. Indeed the writer wonders how such sensational silliness is topical to what Abians need to hear after 17 years of leaving as the deputy Governor? Or what Aba people need to hear after Abaribe’s 16 years of underrepresentation.

If such triviality made the pages of a 16-year serving senator’s autobiography, it means the Senator has nothing to tell us and has no accomplishments to show for his life. An educated man and a lecturer presenting what sounds like a tale by moonlight in his book is not a Made in Aba style.

Again, should Enyinnaya Abaribe summon the courage to write a proper autobiography, the reader expects the Abaribe to tell us how his sojourn in politics was catalysed by his benefactor, Senator Orji Kalu, when he was a stranded passenger at a motor park and was offered a free ride by Senator Kalu. Volume 2 of his book should tell us how Abaribe has continued to freeload on the graciousness of Senator Orji Kalu, the common wealth of Abians and the zonal intervention projects of his constituents.