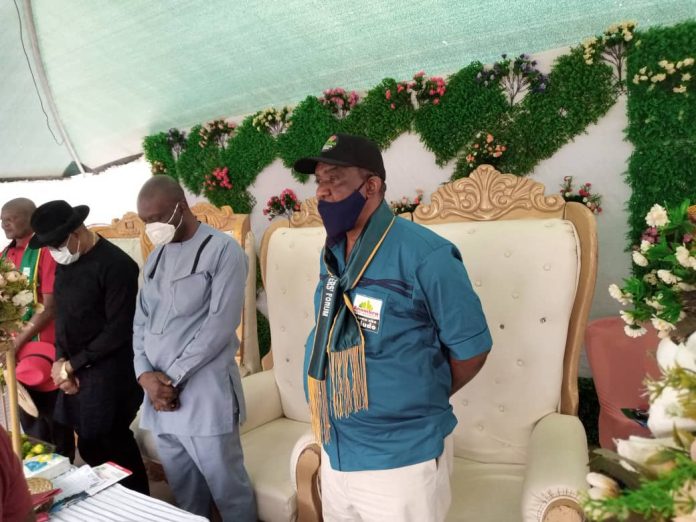 Prof. Chukwuma Soludo, on February 21, 2021 received a massive boost in Ideani, Idemili North Local Government Area, Anambra State as Ndi Idemili rose in unison to throw their weight behind his governorship bid. In a colourful and well attended ceremony in Ideani country home of Chief Leon Mezue, the people made up of leaders of thought, members of Soludo support groups, youths and women, adopted Soludo as their candidate for governor in the Anambra 2021 governorship election amidst cheers and jubilation.

Chief Leon Mezue, calm, humble and deliberate, together with his hardworking Soludo Promoters Forum (SPF) Executives of Idemili North and South, put the event together after weeks of planning and gritty execution. Mezue and Prof. Joseph Ogbuefi are saddled with oversight of the activities of the two heavily populated local governments. They have proven time and time again that they are battle ready with their nimble-footed ground troops.

Soludo, who was ably represented at the event by the Anambra State Honourable Commissioner for Public Utilities, Engr. Emeka Ezenwanne, thanked Ndi Idemili for their support, sacrifices, love and for believing in Soludo’s vision of transforming Anambra into a livable and prosperous state that offers opportunities for Ndi Anambra and foreigners. He assured that Soludo would completely devote himself to lifting the poor out of poverty and move Anambra state higher, higher and higher. He implored the cheering crowd to support the journey to the promised land with their ideas and talents.

Engr. Ezenwanne also expressed his gratitude to the Idemili people, assuring them that their confidence in Soludo will not be taken for granted. He explained that the beauty of a Soludo governorship is hinged on the fact that he will hit the ground running, having been closely associated with the programmes of this government in addition to his leadership of the Government Committee on the development plan for the next fifty years.

A very elated Chief Mezue welcomed guests, during which he drew attention to the deplorable state of the intra-city roads in his community. This was followed by an explanation of the reason for establishing Soludo Promoters Forum by this writer. His speech was followed by another thank you message by Hon. Chike Anyaonu.

A goodwill message on behalf of the support groups was delivered by Chinedu Nwoye. The frenzy of excitement of the youths led by their hardworking Dr. Nelson Omenugha reached a crescendo with the unveiling of their Soludo branded wrapper, donated by an SPF member.

The Ideani Soludo reception was indeed a political earthquake that has indeed eclipsed the opposition in the two Frontline local governments. Why? How? Soludo Solution is knocking at the doorsteps of Ndi Idemili and everywhere you go, hundreds of thousands hearts are opening and as they say, once hearts open to new and beautiful ideas, they will never be the same again. And a livable Anambra Smart Megacity is truly beautiful.