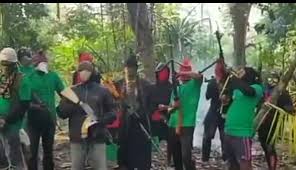 1. I read with joy and excitement the Press Release by some spirits of Biafraland who described themselves as the Biafran People’s Army (BPA). I also watched their video demonstration. I have decided to refer to them as spirits of Biafraland because I could not see their faces. In the Igbo Spiritology and Cosmic Science, human beings do not see the faces of spirits and anybody who tries to see the face of a spirit will either go blind or have blisters and leprosy on his face. So, in my opinion, they are spirits speaking with the voice of humans. After listening to them and reading their Press Release, I described them as Ndi Mmuo Biafra who had emerged from the spiritworld to cleanse the Biafran Struggle and bring sanity, orderliness, decency, and decorum in the Biafran Project. Most importantly, the spirits have created the balance of terror required in the Biafra Project as they will spare nobody who messes up or constitutes an obstacle in the Biafran Project, whether the person is a Biafran or not.

2. I was impressed with their introduction in the Press Release captioned, “BIAFRA PEOPLES ARMY- NEVER AGAIN TO NIGERIA’S HOSTILITY” where they stated as follows:

Allow us to introduce Biafra Peoples’ Army (B.P.A). Over the years we the Indigenous Peoples of Biafra have been maligned and treated as worthless citizens, annihilated in our millions, our women and aged raped, our farms now a death trap, our rivers polluted; despite all these atrocities against our Nation Biafra in the contraption called Nigeria. We have been systematically ostracised from the failed Nigeria state and treated as third-class citizens even without provocation, despite our land being harnessed of its natural resources.

The past decades after the 1967 -1970 civil war ended, our Kith and Kin have attempted to raise the Biafra flag, in the wave of the struggle, some Biafrans became money changers, desecrated the sacred Biafra Name, committed our youths to the front-line that death and anguish became our food on daily basis. Having witnessed all the shenanigans bedevilled the sacred Biafra freedom agitation as perpetrated amongst pro-independence groups, especially the recent IPOB group, we wish to state categorically the following:

(1). Never again shall the Nigeria state and her official and unofficial agent encroach the Biafra geo-space to continue the onslaught against our people and return freely without consequences.

(2). Every unofficial killer agents of Nigeria namely Fulani terrorist in disguise as Herders and Bandits must evacuate the entire Biafraland effect from 30th January 2021.

(3). In this course, as Biafra Peoples’ Army begins our march, we use this medium to warn every money mongers masquerading as a freedom fighter to desist from using the Biafra name to amass wealth for their aggrandisement, forthwith, we shall serve a holy porridge to anyone found wanting or flouting this command.

(4). IPOB and its leadership are warned to desist from their loquacious attitude, Biafra is too big a Nation to become a toy in the hands of mediocre, whose only wish is to seek for cheap popularity and amass wealth on the blood of innocent Biafrans. Attack the sanctity of Biafra Peoples’ Army and dire consequences shall be served. This is the only warning to come, ignore at their peril.

(5). In due time, we shall nominate a more formidable group from amongst the numerous pro-independence groups that shall relate with Biafrans on our behalf, we are still studying all the existing agitating groups and their antecedent, when concluded, we shall announce to the world.

Beloved Biafrans, the Council of Biafra Peoples’ Army have taken over the drive and pursuit of our non-negotiable freedom from Nigeria. Accept our 100% loyalty to you the owners of the land; we employ everyone to be ready for what is to come, it’s no longer business as usual, its either Biafra freedom or Nigeria shall know no peace.
Signed:
Captain Telemor Jones
Commanding Officer 1st of the Great Biafra People’s Army

5. In Paragraph 3 of their statement, they warned every money monger masquerading as a freedom fighter using Biafra to amass wealth for their personal aggrandisement. Interestingly, Nnamdi Kanu responded to the Press Release and Video demonstration by the Biafra Peoples Army. In his broadcast, he was screaming, cursing, abusing and accusing them of being saboteurs created and bribed by the Nigerian DSS to destroy his own group. I looked at his face and could see a desperate man sinking into the ocean of eternal destruction but clutching in vain to straws on the banks of the ocean that could not save him from drowning. History is being made as we watch.

6. Now, let me speak on the issues of law pertaining to the emergence of the Biafra Peoples Army. I know that some lawyers may be considering the legality or illegality of the Biafra Peoples Army. The first thing we must understand is that the Biafra Peoples Army made their mission and intention very clear. They did not say that they would commit any offences against the Nigerian State such as treason, treasonable felony or instigating invasion of Nigeria contrary to sections 37 and 38 or sections 40 to 43 of the Criminal Code. They did not say that they would oppose the Nigerian sovereignty but to stop the Nigerian hostility against the Biafrans and the attacks of the killer Fulani herdsmen. Some people may frown at their possession of fire arms but we shall consider the issue critically together with the possession of fire arms by the Fulani herdsmen in Nigeria.

7. At Page 276 of my book, “Biafra or Nigerian Presidency- What the Ibos Want”, I referred to Alhaji Asari Dokubo’s interview where he described the use of arms in the struggle for resource control as necessary to create a balance of terror between the Nigerian Government and the regions that produce oil. This has therefore created an interesting dimension in the development of Nigerian Jurisprudence of crime, giving answer to the question I posed in my Research Work published in 2006, “THE ROAD MAP TO PEACE AND DEVELOPMENT IN THE NIGER DELTA”, namely: “If the youths of the Niger Delta had not taken up arms against the Nigerian Government and the Oil Companies, would Niger Delta have received urgent attention from Nigerian Government and the International Community?” The answer is in the negative.

8. The Government of Nigeria and the international community listened to the Niger Delta militants because they took up arms. In recent times when the Boko Haram militants in the North took up arms against the Nigerian Government, bombing even the Police Headquarters and the United Nations Building in Abuja, terrorizing all citizens and demanding for an Islamic State where they would practise their religion and culture the way they understand it, the Nigerian Government and Nigerian leaders called for settlement and negotiation with Boko Haram! The members of Boko Haram who were arrested for the crimes were released by the order of the State Governor. Their act was not regarded as criminal under the Nigerian Jurisprudence of crime based on precedence.

9. We have seen that other ethnic nationalities are also expressing their desire to exercise their rights to self-determination. We have also observed a new development in ethnic agitation as violence is gradually becoming acceptable in the jurisprudence of politics and governance in Nigeria. Any ethnic group that agitates with violence is appeased and settled and granted amnesty but any group that agitates peacefully is ignored. A new standard has therefore been set in the Nigerian politics of power. This is an interesting subject in the development of the Nigerian law of jurisprudence.

10. During the resource control war between the Niger Delta Militants and the Nigerian Government before they were granted amnesty and the struggle by Islamic fundamentalists for religious State, many commentators said it was necessary to differentiate between criminality and the political struggle for resource control or religious State. But all the militants whether criminal, political or religious militants carry arms and ammunitions and effect kidnap and unleash mayhem with bombs and explosives.

11. The agitators for Resource Control and agitators for Islamic State are pacified and not regarded as criminals although they do so with violence. I read in the newspapers some years ago that Boko Haram militants in the North nominated the then Retired Major General Muhammadu Buhari as the person who would negotiate on their behalf. The Nigerian Criminal Law is developing to an interesting dimension now. The militants who loot and kidnap people for ransoms are regarded as criminals while those who struggle for resource control, political freedom or religious states are not regarded as criminals. In effect, it is the mens rea (intention of the militants) and not the actus reus (the act itself) that determines whether their act is criminal or political even though they all carry arms and waste lives. The wastage of lives is regarded as collateral damage. This principle of interpretation of the Criminal Law must now be applied to the Biafra Peoples Army. I therefore submit that they are not criminals under the Nigerian Legal System based on precedence.