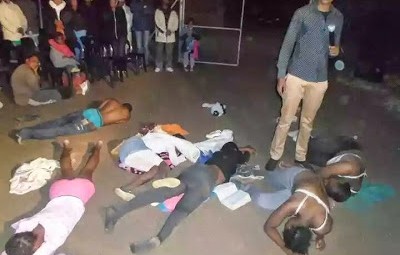 PRETORIA – A pastor of the Soshanguve Church, End Times Disciples Ministries, has come under fire for allegedly using the unconventional methods of having congregation members strip and then stepping on them to preach.

Images that were posted to the church’s Facebook page on Thursday went viral on social media and across the internet.

In the images, members of the church can be seen stripped down to their underwear and the pastor is seen stepping on some.

There is an image of a church member licking the pastor’s boots and one of the pastor allegedly jumping on members of congregation.

In a caption for the image of the pastor jumping on members, it is implied the congregants felt no pain as God is with them.

The caption reads, “Total Demonstration of God’s Power >No Pain felt in them, meaning God is with us. To God be the Glory”.

The page has since deleted some of the pictures and the pastor could not be reached for comment.