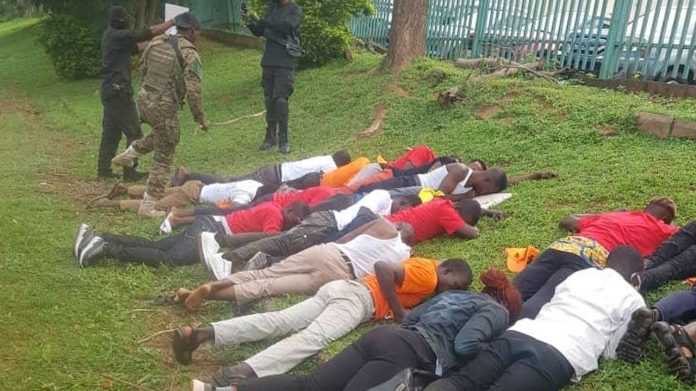 Nigeria Police yesterday deployed security operatives in Lagos and Abuja as the force arrested members of the #RevolutionNow group. The deployment and arrests were meant to prevent planned protests by the group.

The protests, called by Sahara Reporters publisher, Omoyele Sowore and Coalition for Revolution (CORE) and tagged national day of action, were scheduled to take place simultaneously across major cities in Nigeria in commemoration of the first anniversary of #RevolutionNow Movement, which held on August 5, 2019.

Co-conveners of the protest had, in a statement signed by Baba Aye and Gbenga Komolafe, said: “To mark the one year of #RevolutionNow Movement and re-launch the campaign for an end to unabating looting of public resources and revamping of the social and economic fabric of our country, the Coalition for Revolution will stage a massive demonstration of the collective anger and deprivation of Nigerian people taking off from two main points in Lagos and simultaneously across major cities in Nigeria.”

But no sooner had the protest started in Lagos than security forces fired tear gas at protesters at Ikeja Under Bridge and on the Third Mainland Bridge.

As the protesters assembled at Ikeja Under Bridge chanting solidarity songs, armed policemen disrupted the march with tear gas.

The protesters carried placards and banners to demand good governance. Some of the banners read: ‘Nigerians are sick and tired of poverty, corruption, injustice and untimely deaths’; ‘Say no to injustice’, ‘Yes to living wage for unemployed youths’, ‘Stop destroying our markets!’

Some protesters resisted the action and the police had to shoot into the air to disperse them.

Some of the protesters were arrested by the police. One of those arrested was Agba Jalingo, publisher of Cross River Watch, who was only recently freed after nearly six months in detention.

They were all detained in Area “F” Police Station in Ikeja, Lagos.
A mobile court sitting in Oshodi, Lagos State has, however, set Abba Jalingo and 18 other protesters free.

Despite their arrest and appearance at mobile courts, members of the group in Abuja manoeuvred their way out of police vigilance and staged a protest at Berger Roundabout.

Some of the protesters earlier arrested at the Unity Fountain were reportedly arraigned at a mobile court sitting at Eagles Square on the allegation that they flouted the COVID-19 guidelines.

More arrests, it was gathered, were made at the Berger Roundabouts after the group’s successful protest.

The protest, planned to hold in states of the Federation and outside the country, demanded good governance in the country.

Although leader of the group, Omoyele Sowore, was absent, a member, who is a lawyer, Pelumi Jemigbesi, addressed journalists on reasons for the protest.

A key demand of protesters, he said, was that the 1999 Constitution should be scrapped to pave the way for Nigerians to decide on new constitution through referendum.

“The 1999 Constitution is a fraudulent document, scrap it and let the people make their own constitution,” he stated.
Other demands, according the lawyer, are the abolition of tuition fees in universities and secondary schools.

“Stop the killings in the country and sack all incompetent service chiefs.

“Stop all estimated billing by the power companies, provide pre-paid meters for free, and communities must have the right to audit electricity bills they get and review licences of all discos,” he added.
He also called for the release of political prisoners, “including El Zakzaky and his wife.”

The Abuja protest was initially scheduled to hold at Federal Secretariat but following heavy presence of security operatives, the protesters opted for another venue near Transcorp Hilton Hotel, which is close to Unity Fountain. But again, the protesters could not converge because operatives took over the new venue before they got there.

Protesters, who arrived at the Unity Fountain from the Mararaba end of the city, were arrested and taken away in trucks.

Protesters earlier arrested at Unity Fountain were arraigned at a mobile court sitting at Eagles Square for flouting COVID-19 guidelines.

“We are back to the Abacha days and this is most unfortunate. We are back to a time again in our national life when the government of the day has criminalised peaceful protests.

“Today, we witnessed flogging, beating, harassing and arresting of peaceful protesters in the nation’s capital by a joint task force of security agencies,” he lamented.

Reacting to the arrest of protesters, Lagos-based rights group, the Socio-Economic Rights and Accountability Project (SERAP) called on the authorities to release those arrested promptly, investigate attacks on protesters, identify security agents suspected to be responsible and bring them to justice.

SERAP in a statement by its Deputy Director, Kolawole Oluwadare, stated,

“Rather than suppressing peaceful protests, the authorities ought to protect peaceful protesters and ensure safe and enabling environment for people to exercise their constitutionally and internationally guaranteed rights to freedom of expression and peaceful assembly.”

It urged UN Human Rights Council, Office of the High Commissioner for Human Rights, African Union and African Commission on Human and Peoples’ Rights to condemn attacks on peaceful protests and to put pressure on Nigeria to prosecute perpetrators and to respect and protect human rights.
Similarly, the Coalition of United Political Parties (CUPP), yesterday, condemned the clampdown on protesters.

The condemnation is contained in a statement signed by CUPP’s National Secretary, Chief Peter Ameh.

The statement read, among others: “Nigeria has been liberated from the deadly claws of military regime and extra judicial killings.

“We strongly call on the President to ensure that the blazing light of democracy handed over to him by the same electorate is not used as a furnace in roasting their lives.”

Police Public Relations Officer (PPRO), ASP Anjuguri Manza, who made the denial, told The Guardian no police officer was involved in the arrests.

“Heavy deployment of police personnel is a normal thing in the FCT; there is actually nothing new about it. It is a normal deployment to ensure protection of lives and properties,” he said

The Magistrate, Idayat Akanni, who was to preside over the trial of the activists, had other cases in other courts and could not sit.
Speaking on behalf of the FCT Ministerial Task Team on COVID-19, Ikharo Attah said about 40 protesters had been released.

“The enforcement team went out in our normal routine operation and this time around and we made some arrest of some persons who came to protest and it is very clear that this is a democratic nation and everyone has the right to protest, to voice out but this must be done within the rules that govern the country and one of such rules is to obey the issues of COVID-19, so they were brought to the mobile court in line with COVID-19 violations.

“When there is protest, social distancing is very difficult to observe, so when they came to the court, the magistrate had several other cases in other courts and couldn’t sit. And in our wisdom, as persons with listening ears, we talked to them, and it was agreed by all parties that they should go and observe COVID-19 protocols before they would be released and they agreed to that do that.”