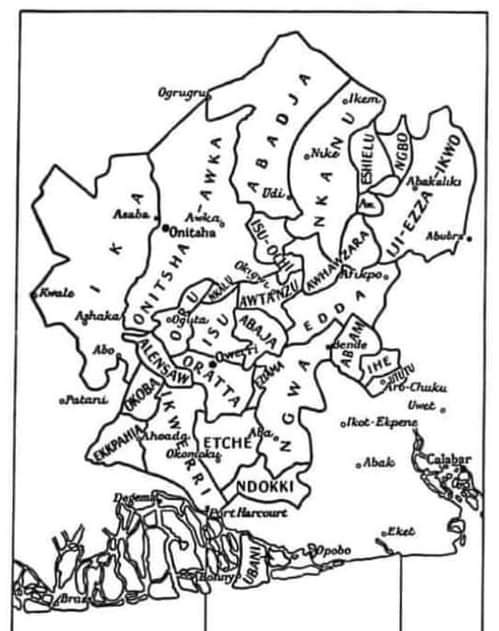 The term “South South” is not recognized by the Nigerian Constitution or any known local or international law. What we have are ethnic nationalities, states, local governments, towns, villages, and families. The Igbo Ethnic Nation is not surrounded by Nigeria no matter how much they try to obfuscate that historical fact.[See the old map of Igbo territory and also read the 1958 Henry Willink’s Minority Commission Report]

The Igbo Nation is an ethnic nationality and exhibits all known attributes of a nation; a community of people formed on the basis of a common language, history, ethnicity, a common culture and, in many cases, a shared territory.

Igbo Nation was not a kingdom. We never had one. Like the Greek nation states, we were Igbo republics joined together by Omenana/ Omenala/ Omenani, our distinct religious, political, legal, economic, social and cultural way of life. Among the Igbo, religion and law are so closely interwoven that many of the most powerful legal sanctions were believed to be derived directly from God. No man could claim to have instituted them.

The Igbo, as indigenous people, have the right to maintain and strengthen their distinct political, legal, economic, social and cultural institutions, while retaining their right to participate fully, if they so choose, in the political, economic, social and cultural life of another nation state. [See Article 5 of the United Nations Declaration on the Rights of Indigenous Peoples]

When the Igbo Sovereignty Project team goes before the United Nations to argue for the recognition of the Igbo Nation, we stand a better chance. And we shall not lose. Other ethnic nationalities who are interested may thereafter request to join us to form Biafra.

Ndi Igbo should know that they are still in Nigeria because of the Fulani imposed leadership currently presiding over their affairs. I hope you will join us soon as we prepare to make our case on the global platform.