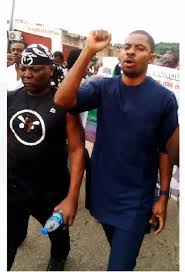 We are dismayed by the arrest and detention of the Abuja Bureau Chief of the Independent Newspaper, Anthony Ezimakor, by the Directorate of State Security (DSS).

1. Mr. Ezimakor was arrested on Wednesday February 28, 2018 when he reported to the DSS office to honour an invitation issued by the agency.

2. Since his arrest, the DSS has denied Mr. Ezimakor access to his lawyers and to critical medication used to manage his blood pressure. Mr. Ezimakor’s family has also been denied access to him.

3. His arrest and detention is in continuation of the clampdown on freedom of speech and free press by the administration of President Muhammadu Buhari in violation of the provisions of the Nigerian Constitution.

4. It is important to raise an alarm in a bid to halt the nation’s almost inexorable slide towards dictatorship and the horrible experiences suffered by Nigerian citizens between 1984 and 1985 when President Buhari held sway as military dictator.

5. We urge all Nigerians and indeed the international community to call on President Buhari to order the immediate and unconditional release of Mr. Ezimakor.

6. The OurMumuDonDo Movement wishes to state emphatically that we shall not hesitate to mobilize Nigerians of good conscience to occupy the Headquarters of the DSS if Mr. Ezimakor is neither released nor granted access to his critical medication, his lawyer, and his family.

Ariyo Dare Atoye
For: Coalition in Defence Of Nigerian Democracy