Home Politics Okorocha & Obiano War: How The 2 Governors Tore Each Other TO... 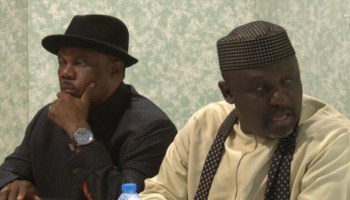 THE recent verbal war between the camps of Governor Rochas Okorocha of Imo State and his Anambra State counterpart, Chief Willie Obiano, may have ultimately how disunited South East Governors’ Forum has been. But more light has thrown on what actually happened and the true involvement of the two governors in question.

Media aides of both governors went out, all guns blazing recently, apparently to showcase their ability to defend their bosses well, by writing unprintable things. Surprisingly, both governors were not in the country at the time the media were awash with the attacks from both sides. While Okorocha was in South Africa, Obi was enjoying his vacation in the United States of America, USA, and it was after the dust settled that people realized that the two governors did not sanction the writings in the first place. Newly elected president of Ohanaeze Ndigbo, the apex Igbo socio cultural organization, Chief Nnia Nwodo, has taken it upon himself to resolve the matter as he realized that the altercation between the two governors was a merely distracting  the Igbo nation from what is important.

Okorocha, Obiano Principled disagreement Nwodo said: “What happened between Okorocha and Obiano is just storm in a tea cup and it has been accentuated by media aides in the way they addressed it. They had a principled disagreement about a representation of which number of governors was crossing from one political party to the other. One made an assertion and the other made a denial. “The rebuttals were taken over by their press aides and put in such unpalatable light that it embarrassed their superiors. When it happened, I called Governor Okorocha, but he was in South Africa.

He was not even in Nigeria at the time the rebuttals were issued instantaneously and replied and claimed not to have seen the rebuttals before their publication. “Governor Obiano, on the other hand, was totally embarrassed. He said to me, this is not my language. I could not have gone this far. I was prepared to discipline my staff until they presented a defence of the Imo governor’s writing, but they did not bother to contact me before writing those things. “They felt they were doing me a favour. He said, how could I discuss my colleague in that manner? Two wrongs don’t make a right. So, in the circumstance, he made a phone call to Okorocha and they both discussed and put it behind them. And they have both respected my plea for an injunction that this matter should not go ahead and that has happened. We are planning to have a meeting of all the South East governors soonest where we will meet and discuss the basis of how we will move forward.”

Also worried by the development, the Association of South East Town Unions, ASETU, frowned at the way the camps of the two governors handled the matter. Describing the conflict as diversionary, the union regretted that instead of working for the development of their areas, the two governors engaged in the politics of vilification, thereby diverting the attention of the people from the economic recession that had brought a lot of hardship to Nigerians.