Home Politics Nwoye is giant-killer; neglect him at your own peril – Ezenwa 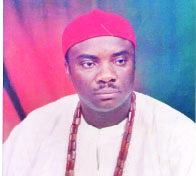 Victor Osita Ezenwa has always played major roles in the political arena of Anambra State. He served at different times as Chairman, Njikoka Local Government Council; State Chairman, Social Democratic Party {SDP}; and the Secretary to the Government in the administration of Gov. Chinwoke Mbadinuju {1999-2003}. He is presently the Director-General of Nwoye Campaign Organisation.

In this interview, Ezenwa describes the APC flag-bearer as a mobiliser of grassroots support, champion of the youths and a giant-killer who other candidates should be wary of.

With only days to the election in Anambra, what do you think the atmosphere will be like, especially as Indigenous People of Biafra {IPOB} continues say it won’t hold?

The atmosphere so far has been conducive for electioneering. And, I believe that the atmosphere will also be conducive for voting on election day – Saturday, November18, 2017, irrespective of the threat by IPOB. This is because the citizens of Anambra State realise the importance of that election. They are determined to perform their civic responsibility. Besides, IPOB has slowed down its activities with the sudden disappearance of Nnamdi Kanu.

The emergence of Nwoye as the candidate of APC was seen by some analysts as an upset, considering that he ran against heavyweights, like Andy Ubah and George Moghalu. What were the secrets of his victory at the primaries?

Some people may have seen Tony Nwoye’s emergence as an upset, but some of us who have been with him know that he is a grassroots person, a mobiliser, humble, down to earth and indeed ordinary. He is usually not moved by the media hype his opponents enjoy. Let me put it this way: He is not very visible in terms of the media attention he enjoys. However, paradoxically, he does well in elections. I hope you will pardon me if I refer to him as a giant-killer.

What do you make of the document that circulated in the social media which was purported to be a pact between a generous billionaire in Anambra and your flag-bearer? How true is it that Dr. Nwoye is backed by a political god-father?

That document which is circulating in the social media falls squarely on its face. The billionaire that is being referred to is known by everybody. It is factually correct that he does not have strings attached to the favour, contributions, donations etc he offers to people. These include religious groups, politicians, cultural groups, and the down-trodden. It is difficult to come across such a personality.

What really are Nwoye’s selling points? Does he have what it takes to govern a state like Anambra?

He is eminently qualified to serve as the governor of Anambra State, having been elected President of NANS, State Chairman of the PDP, and a serving member of the House of Representatives. As you very well know, he is a medical doctor by training and what is more important, he is happily married. And talking about his selling points, for me, the campaign issues from the perspective of my candidate, Dr. Tony Nwoye, are mainly the quality of education and empowerment of the young school leavers. He believes that whatever anybody becomes in the future depends on the opportunity structure available to the person. Being a former President of the National Association of Nigerian Students {NANS}, his soul is with the younger generation.

Against candidates like Gov. Obiano for APGA, Oseloka Obaze for PDP and Osita Chidoka for UPP, what are Dr. Tony Nwoye’s chances of winning the election?

Our chances of winning are very bright. Anybody, who neglects him, does so at his own peril. As stated above, he is a giant-killer in the true sense of the word.

Do you see church denomination {Catholic/Anglican} being a strong factor in the election as has been the case in the past?

Religious politics was very prevalent before, but it has diminished considerably; because nothing really lasts forever. The people are wiser now.

Do you agree that apart from the incumbency factor, it will be an uphill task beating APGA in the only state it holds sway, where the memory of Odumegwu-Ojukwu is still revered?

Nobody is dismissive of APGA or the incumbency factor. But keep in mind that even the revered Ikemba Odumegwu-Ojukwu, did lose some elections during his life-time. His memory should be left to continue to rest in peace, so that he would not start to spin in his grave. As a matter of fact, some of those who were great apostles of APGA, are now chieftains of PDP and other political parties. So, you can see that people are not very concerned on which side of the ideological spectrum that anybody belongs.