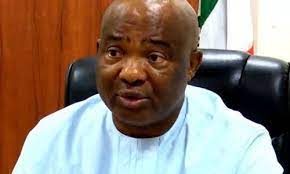 Governor Hope Uzodimma of Imo State has said that it is unfortunate that people kill human beings these days as if they are killing rams,’’ under President Muhammadu Buhari’s regime, Igbere TV reports.

Uzodinma stated this on Wednesday after holding a closed-door meeting with the president.

Suggesting that the nation’s political leaders are the brains behind the widespread violence, Uzodimma noted, “I will call on all of us as leaders, as Nigerians, to protect the sanctity of our nation and protect the interest of our country.”

He urged them to “respect and obey the rule of law and do things that are allowed by law and condemn illegal and criminal activities.”

The Imo governor also called on Nigerians to condemn crimes whenever they occur, saying justice must be served on whoever is found wanting.

Speaking on the backdrop of Tuesday’s attack on the Nigerian Defence Academy Kaduna, Uzodimma explained that people must not take the laws into their hands no matter their grievance.

“The business of government is the protection of lives and property, and we must act as a government and live up to the responsibilities of government,” said Mr Uzodimma. “So, we try to maintain law and order and condemn illegal and criminal activities as well as make those who are apprehended to face the law.”

He, however, urged aggrieved Nigerians not to take the law into their own hands as he noted that “so many people are taking laws into their hands, and some aggrieved people have resorted to self-help.”

“Illegality upon illegality is still illegality. But all we try to do is to appeal to our people because collectively, I am almost certain that if all of us agree today that unknown gunmen and bandits must stop, they will stop,” he assured Nigerians. “Somehow, some people tacitly and otherwise are still allowing and encouraging these criminals to harass and intimidate innocent citizens.”