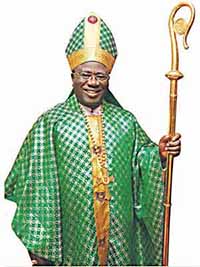 Prelate of the Methodist Church Nigeria (MCN), Dr. Chukwuemeka Kalu Uche, has said the present structure of Nigeria should be re-negotiated, with each zone having some measures of autonomy.

He said the current structure is inimical to the growth and development of the nation.

Uche disclosed this in an interview with newsmen at the MCN, Diocese of Ogbomoso, Oyo State, after a programme to commemorate one year of consecration of Right Revd Ademola Moradeyo as a bishop, installation of patron and patroness for the children in the diocese and presentation of awards of excellence to notable Nigerians and foreigners.

The awardees included Special Adviser on Media and Publicity to President Muhammadu Buhari, Pastor Femi Adesina, who was honoured with Excellence Award of the Faithful of God; Minister of Communication, Alhaji Adebayo Shittu (Great Pillar of Trust); former governor of Oyo State, Otunba Adebayo Alao-Akala (Grand Patron of the Diocese); wife of the MCN Prelate, Florence Uche (Grand Matriarch); wife of immediate past Prelate,  Abimbola Makinde (Grand Matriarch); and scores of other achievers.

Uche said: “The idea of coming to Abuja is not helping us and that’s why we have massive unemployment. Each area knows her needs. So, if we re-negotiate Nigeria, we are not going to divide, each area will have a measure of autonomy, just as it was before the military takeover, that’s what we are clamouring for.

“We want a Nigeria where the component parts, whether we call them regions or zones, will be stronger than the centre. Everybody will contribute and agree to a percentage of her wealth to the centre.

“If we want the present zoning of the Independent National Electoral Commission (INEC), which is in line with the zoning of the Peoples Democratic Party (PDP) and the All Progressives Congress (APC), that will be nice, so that we may have the South East zone, South West zone, South South zone, North East zone, North Central zone and North West zone. Each area produces something that will be her contribution to the centre.”

“We may only retain police, immigration, army, security forces for the federal set up. We can have something like vigilante group or community policing for the various areas or regions.

“This will make for healthy competition. What we are doing now is not helping us and we are not getting better. We all love Nigeria. If you go to the United States, immigration for instance has a measure of control; the measures, the governors, that’s what we want for our country so that we can develop. What we are doing now is a unitary government and unitary government is a military in conduction, it is not helping us.”

The Prelate further stated that presidential system of government “is also very costly because each member of the House of Representatives has special assistants, this and that, and that takes a lot of money.

Uche also charged Nigerians on obedience to God, saying everybody should be selfless. Everybody should think more of Nigeria than thinking of self. We must think of what we can do to improve our country and the most important thing we must do is to empower our young people.

“If we want to go into mechanised agriculture, we will go. In our system of education, talking about cognitive alone is not helping us. Education has to do with cognitive, affective and psychomotor. Psychomotor has to do with vocational education, where people will be employers of labour and not seekers of job. That will help us.”