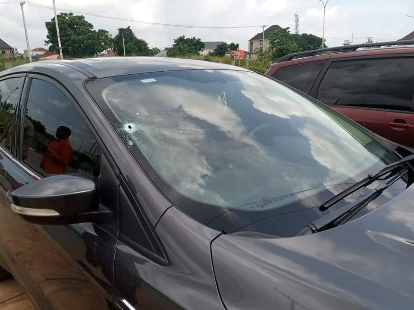 Anambra State Commissioner for lands, Hon Bonaventure Enemali has escaped death by whiskers as security agents suspected to be Naval officers opened fire on his car.

Report of the attack is currently trending on social media.

The message stated that: “The Anambra State Commissioner for Lands, Hon Bonaventure Enemali, narrowly escaped been (sic) murdered in cold blood this afternoon. You can see how one of the Nigerian Navy men at Awukuzu junction targeted and shoot at the honourable commissioner’s car from the rear glass.

My questions are: what are Navy men doing at the junction? Why should they shoot innocent citizens at sight?”

According to a report by The Razor, the attack happened on Sunday evening, when a Naval officer at Awkuzu Junction shot at his car, piercing the back windshield, into the Ford Escape SUV, which the Commissioner was driven in.

TheRazorNews reported that the Commisioner, Enemali, confirmed the attack, saying that it was still like a dream to him.

Asked if he was flagged down and he refused to stop or drove dangerously, Enemali said none of the above happened.

As I speak, I’m still trying to pierce together the details of what happened. It happened just this afternoon,” he said.

Lt Ajikobi, the Public Relations Officer of the Navy outstation in Anambra, told the online platform that he would get back with details.