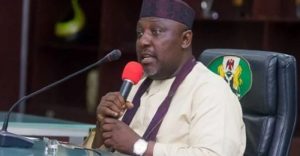 The name of Imo State Governor, Rochas Okorocha, has been removed  from list of elected senators by the Independent National Electoral Commission (INEC).

At INEC website, a note for Imo West simply said: “Declared under duress.”

Okorocha was announced winner of the senatorial election of February 23, but  returning officer for the election, Innocent Ibeabuchi, later said he  was forced to declare the governor winner.

The commission’s chairman, Mahmood Yakubu, had last week said the commission would not issue certificate of Return to any candidate declared winner of an election under duress.