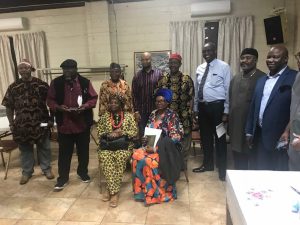 A Forum of Igbo Communities in Chicago, USA has endorsed the Enugu declaration of Igbo position to establish the Igbo Nation either as an Autonomous Region in the new Federal Union in the new Federal Union or as an Independent Republic of Alaigbo/Biafra.The Forum recognized and expressed deep satisfaction over the emergency and achievements of the Alaigbo Development Foundation (ADF) as well as the new strategic impetus it has brought to Igbo struggle to chart a new course for the survival and development of Alaigbo.The Igbo Communities Forum Chicago called on the ADF to help in promoting greater synergy and focus among all the groups and forces presently engaged in the struggle to liberate Alaigbo from the shackle of annihilation. 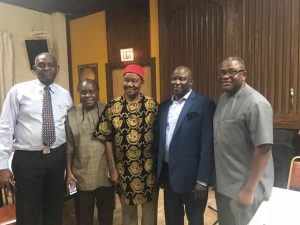 On his part, the President of ADF-Prof Uzodinma Nwala who led the ADF delegation to USA told the Igbo gathering that Alaigbo did not become part of the Federal Republic of Nigeria initially out of choice but by force due to the determination of a foreign power that led to the Amalgamation of 1914.Prof Nwala spoke on the issues of Igbo Regional Integration; Homeland Security; the on-going ethnic and religious cleansing in Nigeria; the militarization of Alaigbo and the brute torture of her women and youths; the infiltration and occupation of ancestral homes of Alaigbo by trained Fulani insurgents masquerading in various guises; the imperative of self-defense as fundamental natural right of Alaigbo and all humanity; the neglect of Alaigbo in the distribution of  immense foreign aid flowing into the coffers of Federal Republic of Nigeria; the seizure of the organs of organs of state authority and concentration of same in the hands of one ethnic group – the President’s kinsmen; urgent necessity of Youth Empowerment programs to alleviate the excruciating level of poverty in Alaigbo; the need to drive the Akuruo-Ulo (Invest-At-Home) Movement as a vital element in the Rebirth and Development of Alaigbo, ETC..

The ADF President also spoke on the latest attempts to define the future of Alaigbo with particular reference to the Awka Declaration hosted by the Ohaneze Ndigbo which President Buhari has dismissed as Personal Agenda. He narrated the background to the Enugu Declaration of July 28, 2018 as a Re-affirmation of Igbo Position and which has been endorsed by over sixteen pan-Igbo and pro-Biafra organizations, including major stakeholders in Alaigbo.

Alaigbo must not compromise her right of free association with her neighbors either in a Federal Union of Nigeria or Biafra based on the principle of Self- determination and the right to opt out of the such union if we so wish.

On behalf of the ADF Delegation

SIGNED: On behalf of the Conveners: