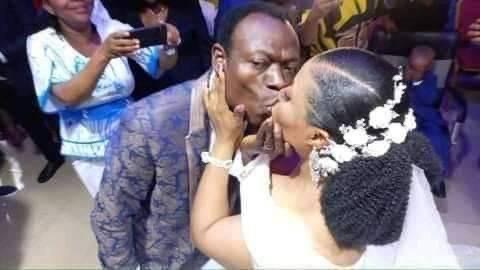 Tina Adeeyo, the woman who was accused of leaving her husband, Ben Bright to marry their pastor has finally broken her silence.

In a video she shared on social media Tina noted that she repeatedly suffered abuse in her 11 years of marriage to Ben. According to her, she endured because she wanted to fight for their marriage and keep their home.

Tina the new bride of Pastor Moses Adeeyo, alleged that her ex-husband never provided in the marriage and even made her borrow huge sum of money which has now been paid off by Pastor Moses.

She claimed that her ex-husband always accused her of adultery and made her take an oath that she has never and will never be unfaithful to him and she obliged.

Tina revealed she finally left his house on November 28, 2020 after an incident that broke the camels back; she alleged that he locked her in the house and held onto the key and reportedly told her that there’s no marriage between them but just a caretaker of their children.

Tina who noted that while all these happened their pastor was not in the picture, begged people to stop criticizing Pastor Moses adding that he had no hand in her leaving her ex-husband as he had claimed.

“11 years of pain, 11 years of torture, 11 years of disgrace and humiliation… As many young ladies who are desiring husband, Bright is free. I challenge you to go and marry Bright. If you’re able to live with him for 3 months, then you come back to me and shake my hand.”

“God gave me life and rescued me from the hand of a lion that want to devour me for 11 years. I ran but you guys feel I should remain there and die. If I had died, the same world will say why didn’t she run for her life?” She said in part.