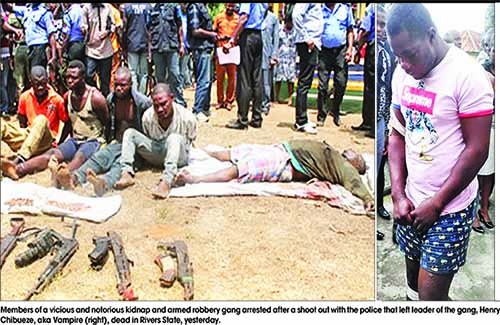 Five weeks after he was rescued by daredevil members of his gang in the premises of an Owerri High Court, Henry Chibueze, a notorious kidnapper in the South-East and South-South zones popularly known as Vampire, is dead.

Vampire was killed during a shoot-out with the police at Omu Awa forest, Ikwerre, Rivers State, in the early hours of yesterday.

Police spokesman, Jimoh Moshood, a Chief Superintendent of Police (CSP), said the “dreaded and deadly kidnap-for-ransom kingpin” was killed by the Police Special Forces, led by Abba Kyari of the Inspector-General of Police’s (IGP) Intelligence Response Team (IRT) at 1am on Thursday.

He said that five suspected members of the gang were also arrested and a cache of arms and ammunition recovered from them.

Moshood disclosed that the gang had been responsible for many kidnappings and robbery attacks in Imo, Abia, Rivers, Delta and other states in the South-East and South-South. He noted that the members of the gang would be paraded and charged to court on completion of investigation.

“Chibueze, the Vampire, was the criminal spirited away by his gang members on January 27, 2017, from the premises of an Owerri High Court,” he said. “He was arrested in 2015 and had been in prison custody following the kidnap of the wife of a government official.”

Chibueze, who was brought to the court alongside other suspects, had escaped when gunmen, in a sports utility vehicle that had been parked at the premises, opened fire as soon as he disembarked from the prison van.

“The suspect was then spirited away by the gunmen, leaving five prison officials and some bystanders wounded by the gunfire. Two other suspects were taken along with him.”

The Public Relations Officer of Nigeria Prisons Service, Mr. James Madugba, said that the accomplices had been mistaken for operatives of the Department of State Services (DSS), hence no alarm was raised when they were spotted at the court.

Chibueze, who was paraded by the DSS before the Ino State governor in 2015, admitted to having carried out several kidnappings in the state and beyond before his arrest. After his escape in January, Governor Rochas Okorocha announced a N5 million bounty for information that would lead to his arrest.

The Inspector-General of Police, on the killing of Vampire, said: “He was shot dead during a gunfight with the police.  A gang opened fire on our men and our men returned fire for fire.  He was fatally wounded, but died on the way to the hospital.”

Meanwhile, there was wild jubilation in the Imo State police command, as policemen rejoiced over the death of Vampire, who they described as notorious.