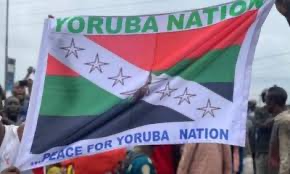 NINAS AND ILANA OMO OODUA ARE NOT PART OF THE YORUBA NATION RALLY PLANNED FOR WASHINGTON DC OCTOBER 1-3, 2021.

The attention of the Secretariat of the Nigerian Indigenous Nationalities Alliance for Self-Determination (NINAS), has been drawn to a video on Social Media, Advertising a 3-Day Rally in Washington DC for the Period October 1-3, 2021.

In the said video which purports to emanate from a Group called “Yoruba Nation” in conjunction with its associates (including IPOB), the emblems of NINAS and that of Ilana Omo Oodua were displayed very conspicuously in a manner that creates the False Impression that NINAS and its associated Platform, Ilana Omo Oodua, are somehow involved in the planned Washington DC Rally of October 1-3, 2021.

The General Public is hereby informed that neither NINAS nor Ilana Omo Oodua, is in anyway involved with the Planned Washington DC Rally of October 1-3, 2021 and that the use of the emblems of both NINAS and Ilana Omo Oodua, were unauthorized.

Coming on the heels of the Million-Man Freedom March at the UN Headquarters in New York where the same Groups now Advertising the said Washington DC Rally, tried unsuccessfully to insert the Terror-Tagged IPOB into the NINAS Freedom March of September 14- 24, 2021 at the UN in New York, NINAS Is closely monitoring what the motive might be for this desperation to foist IPOB on NINAS and Ilana Omo Oodua, despite the many unambiguous Public Disclaimers on IPOB, by both NINAS and Ilana Omo Oodua, (including in the ongoing New York NINAS Freedom March where the New York Police was called in to prevent an IPOB Stalwart from displaying IPOB Colours and Insignia).

For the avoidance of doubt, the Public is invited to note that NINAS is an Alliance of Three Blocs (Lower Niger Bloc, the Yoruba Bloc and the Middle-Belt Bloc). Each of these Three Blocs has a Coordinating Organization through which NINAS relates to each Bloc.

Ilana Omo Oodua Is the Coordinating Organization in the Yoruba Bloc of the NINAS Alliance and it is through Ilana that NINAS relates with other Yoruba Self-Determination Platforms/Organizations that wholly embrace the NINAS Grand Propositions as encapsulated in the December 16, 2020 NINAS Constitutional Force Majeure Proclamation.

Accordingly, while NINAS had no hesitation dealing with the “Yoruba Nation” Group whilst the “Yoruba Nation” Group aligned itself with Ilana Omo Oodua, the situation changes radically if the Yoruba Nation Group goes off solo on its own, associating with the IPOB with which neither NINAS nor Ilana Omo Oodua wants any form of association, for reasons that had been repeatedly placed in the Public Domain, namely – the Terror-tag on IPOB as well as the Terror/Violence Tactics adopted by IPOB since its transmutation to ESN and the so-called “Unknown Gunmen”.

It is on account of the Foregoing that the NINAS Secretariat deemed it necessary to issue this Disclaimer, on behalf of its Constituent Coordination Organizations (including Ilana Omo Oodua), to state Categorically that NINAS has nothing to do with the October 1-3, 2021 Mega-Rally in Washington DC being planned by the Yoruba Nation Group in conjunction with IPOB.

For and Behalf of NINAS Secretariat: