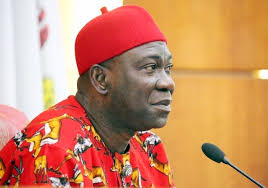 Former Deputy President of the Nigerian Senate, Senator Ike Ekweremadu has revealed how the country can get a new Constitution.

Ekweremadu made the revelation while speaking to Journalists on the sideline at the Enugu Centre of the South East Zonal public hearing on the proposed alteration to the provisions of the Constitution of the Federal Republic of Nigeria, 1999.

The Senator representing Enugu West Senatorial Zone said the only way to bring a new Constitution without calling for anarchy is to amend the existing Constitution as it has been done in some countries similar challenge.

“We have seen countries with a similar challenge, countries like Kenya, Brazil, etc., what they did was to amend the original Constitution to make a provision on how that Constitution can be amended. We did it the last time and it wasn’t assented to.”

Continuing, Sen Ekweremadu said the relevant sections of the Constitution has to be amended to accommodate burning issues in the country.

“We have to amend this Constitution to reflect even how to bring a new Constitution. All these have to be spelt out in the amendment, whether we’re doing it today or tomorrow.”

He called on Nigerians to take advantage of the public hearing exercise to kick start the process so that at the appropriate time when the relevant sections of the constitution has been amended, we can have a conversation on having a new Constitution.

Ekweremadu also said having a new Constitution is pertinent because, currently, a lot amendments has been made to the Constitution which most Nigerians doesn’t know and this might lead to confusion.

“We have done a lot of amendments which most Nigerians don’t even know and there’s confusion already. When we do more, it gets to a point where we don’t even know which one is the original text and the one that has been amended.