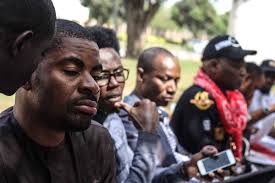 In a recorded video made available to BVI Channel 1,the former Executive Chairman of Nigerian Electricity Regulatory Commission(NERC)-Dr Sam Amadi announced that he will use his ideas,energy and resources to support citizen action being spearheaded by OURMUMUDONDO under the Leadership of CharleyBoy.The full statement reads :

‘Historically,democracy has been founded primarily on an independent media and an engaging citizenship.If you do not have independent media reporting,giving fair reportage to both government and those who have issues against government,we cannot have a thriving democracy.So i want to salute the courage and the commitment of the Nigerian Press for supporting OURMUMUDONDO campaign.Any responsible Government will appreciate the good work OURMUMUDONDO has undertaken.This is the best support any government can secure with citizens who are informed,non-violently,peacefully and continue to monitor the activities of government at all levels.If there is no inquire by Citizen group on governance,even the best angels can become devil in Government .Power corrupts and absolute power corrupts absolutely, and that is why you need citizen engagement ,to make sure that power is checkmated and controlled .

Accountability is based on the demand and supply of Citizen action.If Citizens are not asking for accountability,those in power will not supply accountability.However,the government of the day should encourage the Citizen action being led by OURMUMUDONDO for effective monitoring of government projects as well as fighting corruption’ The statement concluded.

BVI Channel 1 has it in good authority that OURMUMUDONDO daily Sit-Out on #BuhariActOrQuit will be coming to a close today with a procession to the office of the  Minister of Justice- Abubakar Malami.