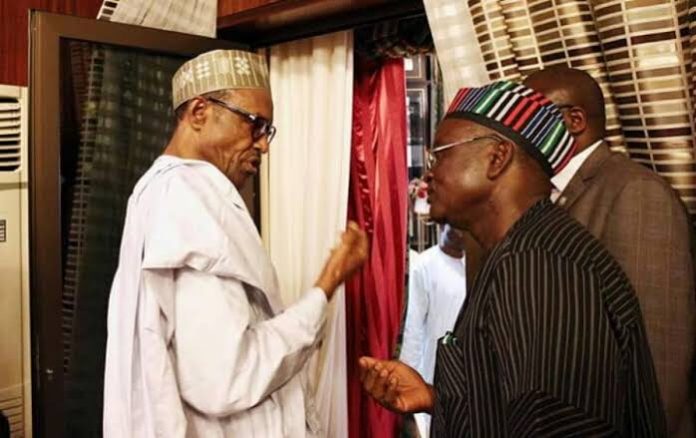 The Governor  of Benue State ,Sam Ortom writes President Buhari again requesting that he should intervene as matter of urgency to save Nigeria from another civil war .The letter reads in full ‘ It is my honour and privilege to extend warm compliments of the New Year to Your Excellency on behalf of myself, the Government and good people of Benue State.

2. As a State, we welcome and appreciate the establishment of three Federal educational institutions in Benue State namely: Federal University of Health Sciences, Federal College of Education and a Federal Polytechnic.

3. We are also thankful for the various appointments given Benue sons and daughters. We expect more of such strategic projects and appointments more so given the support you have received from our Government and the people of the State. We acknowledge and appreciate the intervention which your Administration made as Bailout to States during the first recession, although Benue is yet to receive the second Tranche which you approved and referred to the Federal Ministry of Finance to verify and pay two years ago and which Kogi State received in 2019.

4. Your Excellency, we especially want to commend you for responding to my earlier appeal to deploy, upgrade and retain Military Operations in the State. These Operations, particularly Operation Whirl Stroke, working in collaboration with other Security Agencies, have contributed to relative peace in several parts of the State even though the challenges are not yet over.

5. Mr. President, we are not oblivious of the challenges that the country has faced in the life of your Administration. These include two recessions, the COVID-19 global pandemic and the unprecedented nationwide security challenges resulting into the largest loss of lives and property since the Civil War. These security challenges especially have unsettled the country economically, socially and politically.

6. Your Excellency, these security challenges have assumed new dimensions where the now emboldened assailants and armed herdsmen daringly enforce their will on legitimate owners and occupants of ancestral lands. There are many areas of concern over the Federal Government’s actions and inactions, including the widely discussed concern over inequalities in key appointments. These have reinforced the perception that the Administration is not fair and just to all Nigerians.

7. Mr. President, please recall my earlier letters drawing your attention to the murderous activities of Miyetti Allah Kautal Hore and other armed Fulani socio-cultural groups and their leaders who publicly and brazenly claimed responsibility for the killings and destruction of property across States of the country. These groups and their leaders have also boasted that Nigeria belongs exclusively to them. The letters alerted you on several challenges and called for the arrest and prosecution of the leaders and proscription of the organizations in question. The letters are as follows:
(i) Incessant Violent Attacks on Benue Farmers in Benue State by Armed Herdsmen Ref. No. AI/68/T.I/64 dated 7th June 2017.

8. We are alarmed that rather than being censured, these leaders and organizations have been emboldened and intensified their atrocities. They have received encouragement in the process through various actions and inactions by the Federal Government, including the following:
(i) Open Visa Policy which has promoted unprecedented influx of Fulani herdsmen carrying sophisticated and prohibited weapons into Nigeria;
(ii) Non-compliance with the ECOWAS protocol on transhumance;
(iii) Swift condemnation of any perceived or real threats on Fulani while maintaining silence over their atrocities and admonishing victimized host communities to accommodate their oppressors and learn to live at peace with them;
(iv) The failure to arrest, disarm and prosecute armed herdsmen and Fulani militia;
(v) Disarming other Nigerians who have licensed weapons;
(vi)Continuation of open grazing and support for grazing reserves, stock routes, cattle colony and Ruga despite nationwide acknowledgement that this practice is unviable; and that ranching is the global best practice for livestock production;
(vii)The non-implementation of the National Livestock Transformation Plan despite its approval by the National Economic Council and its acceptance by pilot States.

9. This ugly situation has caused devastation across the country. In Benue State, 19 out of 23 Local Government Areas have been affected by attacks by Fulani herdsmen leading to loss of lives, destruction of property and the displacement of hundreds of thousands of Benue people who are now living in Internally Displaced Persons Camps and host communities across the State. The total number of Internally Displaced Persons currently in the Camps in Benue State is 483,692 persons.

10. Returning these Internally Displaced Persons (IDPs) to their ancestral homes has been impossible as herdsmen continue to attack, kill, maim and rape those who return. The Federal Government is also yet to redeem the pledge made on 15th May, 2018 by Vice President Prof. Yemi Osibanjo to contribute N10Billion to Benue State towards the reconstruction, rehabilitation, reintegration and resettlement of displaced persons. The failure of the IDPs to return to their ancestral homes to resume normal farming activities, together with the impact of climate change, has posed a serious threat to national food security, as evidenced by rising food prices.

11. Sir, we all remember the wise counsel of Nigeria’s former Permanent Representative to the United Nations, the late Alhaji Maitama Sule, when Northern Leaders Forum visited you as the President-Elect in 2015. He said, inter alia “…With justice, you can rule Nigeria well. Justice is the key. If you do justice to all and sundry, and I say all and sundry. If you’re going to judge between people, do justice irrespective of their tribe, religion or even political inclination. Justice must be done to whosoever deserves it.”

12. Mr. President, this call for justice is the heart cry of every patriotic Nigerian. It is not a call against the Fulani race or any other ethnic group, but a call to make Nigeria work for every Nigerian in line with the Oath of Office we took as leaders and your pledge to be a President for all Nigerians and to be for everybody and for nobody. Unfortunately, you seem to be tilting towards the Fulani at the expense of other nationalists.

13. Many citizens including patriotic Fulanis like Dr. Nura Alkali are alarmed at this tilt and the boast of Miyetti Allah that Nigeria is the heritage of the Fulani of the whole world. These citizens continue to condemn the atrocities of the Fulani across the country while also calling on the Federal Government to end these atrocities by withdrawing from their one-sided sympathy for herdsmen.

14. Only recently, the Sultan of Sokoto, His Eminence Muhammadu Sa’ad Abubakar III, added his voice in this regard. He acknowledged that seven or eight out of every 10 kidnappers arrested in Nigeria are Fulani. This is not a good testimony. More so, the consequences this image has cast on the Fulani tribe should be corrected now.

15. These concerns were reiterated by the Nigerian Tribune Editorial of January 25, 2021:
“it has become an established pattern for his Presidency to swiftly intervene on issues bordering on the atrocities of Fulani herdsmen in the country, acting as their publicist in a fashion that assails the sensibility of other Nigerians, and oftentimes unabashedly descending into the arena and polarising the country along ethnic and regional lines. This sordid trend is inimical to confidence building, genuine bonding and cohesion of citizens in a multi-ethnic, multi- cultural and multi-religious society and it is really concerning, and perilously so, that such vital sensitivities are being discounted at the highest level of governance in the land. From his utterances and actions, it is clear that Muhammadu Buhari is not ready to be the President of all Nigerians.”

16. It is important to point out that these are not sentiments directed against Fulanis who are indigenous to Nigeria and have been living at peace with other Nigerians. Testimonies abound in that regard. For example, my wife and I were accommodated by a Fulani man while in school at the Ahmadu Bello University, Zaria. Till date, we are still very good family friends and he visits me occasionally in Benue. This point underscores the pain we all have had to go through to understand the tragedy where armed herdsmen from Mali, Burkina Faso, Chad, Niger, Cameroon and other neighbouring countries are pushing the whole country to the precipice. While addressing the Nigerian community on Tuesday 19th April 2019 in Dubai, You also blamed these foreign herdsmen for the attacks on Nigeria.

17. Mr. President, as a major stakeholder in the Nigeria project, I have a responsibility to raise these major concerns and to offer some recommendations towards addressing them.
(i) The Federal Government should develop a National Ranching Policy in line with global best practice in animal husbandry. Today, open grazing is extinct in most countries of the world. In Europe, America, Asia and in many countries in Africa, pastoralism has long given way to ranching. How can Nigeria then still be battling with a problem of pastoralism that in other countries has been solved over a century ago? According to the United States Department of Agriculture (USDA), India has 303 million cattle, Brazil, 226 million, China, 100 million, USA, 93 million, Argentina, 53 million and Australia 27 million. All these countries ranch their animals. Nigeria has less than 20 million cattle which could also be easily ranched. Unfortunately, the cows are allowed to either roam the streets freely or encroach on people’s farms and other investments. A Ranching policy in Nigeria will provide avenue for both crop farmers and those involved in animal husbandry to increase production using modern technology. This is the only way out of ending farmers/herders conflict;
(ii) Direct the Nigeria Police Force and other security agencies to enforce Prohibition of Open Grazing Laws passed by various States of the federation;
(iii) Abolish Open Visa policy and direct relevant security agencies to ensure full compliance with the ECOWAS Protocol on Transhumance;
(iv) The Federal Government should immediately pay compensation to families killed and those whose properties were destroyed by the herdsmen in various communities across the country;
(v) Condemn the atrocities perpetrated by armed herdsmen; arrest and prosecute the leadership of Miyetti Allah Kautal Hore and other Fulani Socio-cultural groups who have consistently admitted to the wanton killings and destruction of communities across the country. These include Husaini Yusuf Bosso (National Vice President of Miyetti Allah Cattle

Herders Association), Badu Salisu Ahmadu and Umar Amir Shehu, (President and Secretary of Fulani Nationality Movement), Alhaji Abdullahi Bello Bodejo and Engr. Saleh Alhassan (President and Secretary of Miyetti Allah Kautal Hore) along with their sponsors;
(vi) Proscribe Miyetti Allah Kautal Hore, Fulani Nationality Movement, Fulani Herders Association and other violent Fulani extremist groups, as was done in the case of the Independent People of Biafra (IPOB), given that the Global Terrorism Index ranks Fulani militia as the fourth deadliest terrorist group in the world;
(vii) LicenseLaw-abidingNigerianstocarryweaponsinself-defence;
(viii) Ensure justice, fairness and equity in all issues relating to public safety and security;
(ix)
Support the resettlement and rehabilitation of Internally Displaced Persons as a result of herdsmen atrocities in all States of the country.

18. In conclusion, Your Excellency, I am writing to you as a patriot who is concerned about your reputation and the fate of our dear country. I am imploring you once again to rise to the challenges of these times to avert the country’s drift to anarchy and disintegration, a situation that sycophants and praise-singers might be unwittingly shielding from you. In 2015, Nigerians enthusiastically welcomed your return as a leader with a reputation for uprightness, fair-mindedness and integrity. The current situation is raising doubts in the minds of many Nigerians who had believed in you. Mr. President, your compatriots are looking up to you to act fast to redress the situation.
I thank you most sincerely for your kind attention. Long live the Federal Republic of Nigeria” the letter concluded.