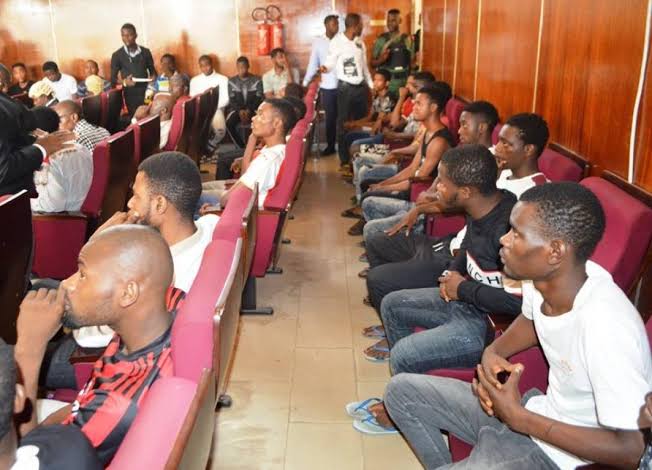 The International Society for Civil Liberties & Rule of Law-INTERSOCIETY is happily announcing another major breakthrough in its campaigns to expose and end a booklet of atrocity crimes that have ravaged the Nigerian Army particularly under the immediate past Chief of Army Staff, Lt Gen Tukur Yusuf Buratai. This time, the major breakthrough recorded was the release on Monday, 15th Feb 2021 of 63 abducted Obigbo residents-all males. They were abducted by the Nigerian Army at Obigbo in Rivers State and held incommunicado for four months or since Oct 2020 in Mogadishu Barracks and other security dungeons in Abuja. Their abduction and confinement clearly amount to unspeakable illegality and unconstitutionality.

Their release followed the landmark consideration of their bail application filed on Wednesday, 10th Feb 2021 before an Abuja Grade 11 Magistrate Court sitting in Wuse. They were freed from four different Army, DSS and Police dungeons in Abuja and environs; namely: Mogadishu Army Barracks, Annex B at Asokoro, DSS Training Center at Central Business District and its abandoned facility at Zuba and the Nigeria Police College at Suleja in Niger State. The freed victims were part of over 400 innocent and defenseless Obigbo residents including over 60 girls and young women abducted between Oct and Nov 2020 at their work places or on their way home from work or while engaging in other lawful social activities.

The release of the 63 abductees was made possible through the lawyerly and activist doggedness of Barr E.R. Okoroafor. Barr E.R. Okoroafor is a British citizen of Igbo nativity and international human rights lawyer. The efforts of the leadership of IPOB in this respect are also worthily recognized and appreciated. While it is hopeful that the newly located 53 young women in the DSS dungeons will soon regain their freedom, bringing the total number of the located or freed to 261; searches are still on to locate the remaining abductees numbering over 140. This is owing to the fact that the Nigerian Army and DSS have refused to speak publicly on the whereabouts of the abductees, the freed ones and why the over 400 residents were abducted at the first place and kept out of public knowledge till date.

Nigerian Army’s Booklet Of Illegalities Source Of Our Anger

It must be boldly stated that Intersociety does not hate the Nigerian Army or the Nigerian Armed Forces or the Nigeria Police or DSS/NIA or the country’s Paramilitaries, but hates and frowns seriously at their current operational methodologies, clearly cloaked in booklet of illegalities. These methodologies are shockingly crude, unprofessional, hateful, unconstitutional, locally and internationally illegal, non human rights compliant, un-secular and ethnically and religiously discriminatory and motivated. Owing to our versatility and deep knowledge of criminal and civil versions of the local and the international human rights and humanitarian laws particularly those acceded to by Nigeria; Intersociety will continue to monitor and speak out authoritatively and knowledgeably against such grisly atrocity crimes and their perpetrators-ensuring that they are ended and their perpetrators get severely punished locally, regionally or internationally.

In arresting citizens wrongly or rightly suspected to have offended punishable laws bordering on Crimes against Persons or Crimes against the State or Crimes against Properties-all categorized globally into “mala inse” and “mala prohibita”; the soldiering and policing authorities in any democratic Member-State of UN including Nigeria are inexcusably prohibited and barred from abducting citizens outside public knowledge and records, hatefully labeling them and taking them into custody, torturing, shooting and raping them to death and disappearing their corpses and detaining them ad infinitum and beyond the limits prescribed in written laws. Such prohibitions also include stripping the abductees half naked and exposing their body systems to unfriendly weathers and other hostile circumstances including insect bites and infections; in addition to totally blocking them from their families, physicians and lawyers.

Names Of The 63 Freed Abductees

For: International Society for Civil Liberties & Rule of Law