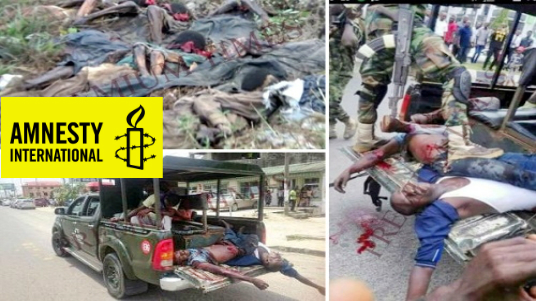 Military clampdown on Radio Biafra faction of agitators for Biafra resulted in 177 deaths in the South-east last year.On the military’s action against  the  Indigenous People of Biafra (IPOB), the report said  the group lost over 177 members between January and February 2016.

Amnesty reported: “The military was deployed in 30 out of Nigeria’s 36 states and in the Federal Capital Territory of Abuja where they performed routine policing functions, including responding to non-violent demonstrations. The military deployment to police public gatherings contributed to the number of extra-judicial executions and unlawful killings.

“Since January, in response to the continued agitation by pro-Biafra campaigners, security forces arbitrarily arrested and killed, at least, 100 members and supporters of the group, Indigenous People of Biafra (IPOB). Some of those arrested were subjected to enforced disappearance.

“On February 9, soldiers and police officers shot at about 200 IPOB under Radio Biafra, who had gathered for a prayer meeting at the National High School in Aba, Abia State. Video footage showed soldiers shooting at peaceful and unarmed IPOB members; at least, 17 people were killed and scores injured.”

The group also said no fewer than 60 people were killed in a joint security operation carried out by the Army, Police, Department of State Security (DSS) and Navy. “Pro-Biafra campaigners had gathered to celebrate Biafra Remembrance Day, in Onitsha (Anambra State). No investigation into these killings had been initiated by the end of the year.”

Also contained in the report  “Bodies were secretly buried in Maiduguri’s cemetery by the Borno State Environmental Protection Agency staff. Among the dead were, at least, 29 children and babies, aged between newborn and five years.”

“Thousands of people have died in these camps due to severe malnutrition. In June, in a guarded camp in Bama, Borno State, the NGO Médecins Sans Frontières reported over 1, 200 bodies had been buried within the past year.”

Amnesty said the International Criminal Court (ICC) was considering eight human rights cases in Nigeria, with the view to determining whether they would be investigated.

Nigeria Cannot Defeat the Igbo and Yoruba At The Same Time