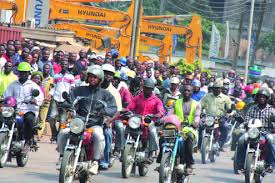 The Anambra State Government won’t be going back on its stand to ban Okada within Onitsha and Awka, as from July 1st,  2018.
According to the public service announcement on the enforcement order signed by the Secretary to the State Government, Prof Solo Chukwulobelu, the areas affected by the ban are as follows:
GREATER ONITSHA AREA
Onitsha Urban (Onitsha North and South LGAs)
Okpoko
Ogbaru Metro
3/3 Area
Obosi/ Awada Area
Nkpor Area up to Ugwunwasike/ New Tarzan
Ogidi Urban
Oba Urban
GREATER AWKA AREA
Awka Metro (including all adjourning streets within the town)
Amawbia Metro (including all adjourning streets in the town)
Nibo Metro
Okpuno
Amansea
SPECIAL AREAS
All major highways from Head Bridge (Onitsha) to Amansea (including the Expressway and Old Road)
All major highways from Head Bridge (Onitsha) to Upper Iweka, to Owerri road and Oba Junction.
The order further called on affected persons to seek alternative means of livelihood as eligible persons may as well take advantage of the loan scheme for the purchase of mini busses as provided by the government through the Anambra Small Business Agency (ASBA).
The various security agencies have also been mandate to arrest and prosecute motorcyclists flouting the order while their motorcycles are impounded and forfeited therewith.
The government thereby calls on Ndị Anambra to support its effort in sanitizing the transport system and sustaining the security in the state.