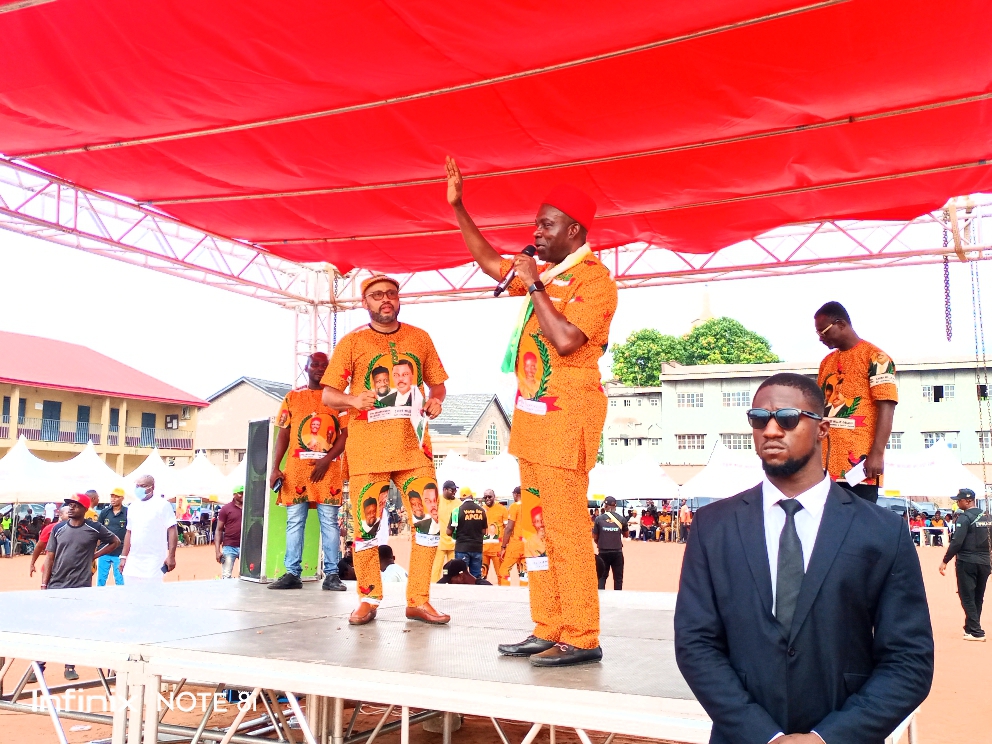 The TC chairman in his speech commended Governor Willie Obiano for his developmental programmes across the state and Onitsha South. He appealed to Soludo to consolidate on Obiano’s sterling achievements. He promised that his LGA will deliver the 321 polling units in the 17 wards in Onitsha South to APGA in the forthcoming governorship election

The two State House of Assembly Members representing the zone, Hon. Uzoma Eli and Hon Beverly Ikpeazu both promised to deliver their constituencies for APGA

Soludo in his response promised to revamp Onitsha, address the bottlenecks the traders usually experience with Customs, eliminate illegal tax collection by employing better ways of collecting taxes as well as encourage the traders’ business partners across the world to come to Anambra State and set up their manufacturing plants, and consequently reverse the state from importing to an exporting state.

He further added that N5 billion capital finance funds would be made available for start-ups to fund businesses, adding that he will also create the right environment for the creation of private sector led jobs and 1000 youth millionaires every year.

Governor Willie Obiano thanked the people for their warm reception and assured them that Soludo will do what he promised and would do exceedingly well. He therefore urged them to come out enmasse to vote for APGA in the coming gubernatorial election

Other speakers at the occasion, include; the Speaker of Anambra State House of Assembly, Rt Hon. Uche Okafor Episeni; Hon Chinedu Obidigwe; Prof Solo Chukwulobelu, Secretary to the State Government and Director-General of the Campaign Council; Barrister Sly Ezeokenwa, National Legal Adviser of APGA and many others

The campaign train later moved to Onitsha North where both Soludo and Obiano were received by another mammoth crowd over 10,000 and the TC chairman, Hon Patrick Aghamba.

Soludo expressed appreciation for the warm reception accorded him and Governor Obiano.

Just as he had earlier said in Onitsha South, Soludo again promised to take Onitsha to its former glory as the international trading hub in West Africa. He said his agenda is to create jobs and more jobs, empower the youths and create wealth. He therefore urged the people to come out on November 6, to vote massively for Soludo/Ibezim ticket

Governor Willie Obiano expressed gratitude to the people and asked them to vote APGA and Soludo/Ibezim ticket come November 6, 2021 overwhelmingly