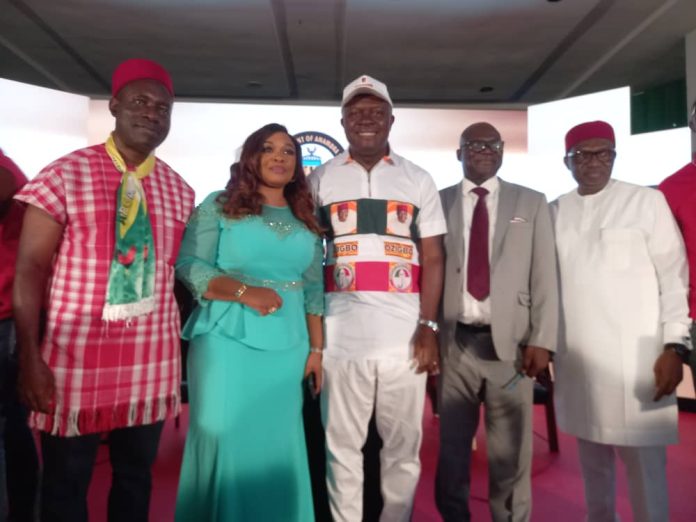 The debate is organised by Arise News Channel, with the support of a non-governmental organisation, Enough-is-Enough Nigeria.

Among the candidates participating in the debate are Andy Uba of All Progressives Congress (APC), Chukwuma Soludo of the All Progressives Grand Alliance (APGA) and Valentine Ozigbo of the Peoples Democratic Party (PDP).

Eighteen political parties are participating in the Anambra election which is obviously going to test the Independent National Electoral Commission (INEC)’s readiness to conduct a hitch-free, free, fair, and credible general elections across Nigeria in 2023.

INEC has confirmed there are 2.5 million registered voters for the Anambra election.

The issue of insecurity in the South-east state, which the candidates participating in the debate are expected to discuss, may be a factor against voter’s turnout because of the sit-at-home order by the pro-Biafra group, IPOB.

The candidates are expected to tell the electorates their plan to restore peace and security in Anambra, as well as their economic blueprint for the state.

The session began with the introduction of the invited candidates, which organisers said was done with transparency.

This was followed by the recitation of the national anthem.

Andy Uba requested for a minute’s silence in honour of Chike Akunyili who was assassinated in September by gunmen suspected to be members of IPOB. Chike Akunyili was the husband of the late boss of the NAFDAC, Dora Akunyili.

Each candidate is given four minutes to give their opening remark. Andy Uba leads the way, reeling out his political credentials.

Charles Soludo, a former Central Bank of Nigeria Governor, was the next. He said his experience in the public and private sector stands him out. He said he has served three presidents, including Presidents Obasanjo, Yar’Adua and Buhari. He said he is throwing his hat into the ring to put all his experiences over the years into serving the people of Anambra.

Valentine Ozigbo said it is heartbreaking to see the way Anambra State has been violence-ridden in the past months. He said what Anambra needs to come out of the “doldrums” is a young, vibrant CEO like himself. “I’m the best of all candidates,” he said, adding that he is passionate about solving the problems in the state.

The debate is anchored by Reuben Abati and Ngozi Alaegbu

Asked about the level of satisfaction he has on the preparation of the security operatives in the build up to the election, Mr Ozigbo said he is satisfied but dissatisfied with how the security challenge has been left to fester for long.

His short response triggered one of the moderators telling the candidates that each of them has three minutes to answer questions posed to them.

In response to the question of insecurity in the state, Mr Soludo said the challenges are politically motivated and he suggested that intelligence gathering was needed to be upped and in liaison with local vigilante groups was key in curbing the menace.

Valentine Ozigbo says APGA and APC have failed Anambra people, as far as insecurity is concerned in the state.

Mr Soludo accused Mr Uba of not engaging during the non-election season. He said the PDP oversaw a government that institutionalised kidnapping of politicians in the state.

This unnerved the two other candidates as he spoke but they were told to hold their thoughts till they have their turns.

The two men exchanged words briefly as it got heated among them.

Mr Soludo was cautioned to stay behind his podium. He asked Mr Uba if he had a school certificate to which Mr Uba said he had one from 1974.

The two men had a short trade of words before the moderators waded in and urged them to be civil.

Mr Ozigbo quickly distanced himself from the traded words, saying his opponents are “The PDP of the past,” suggesting the party he now represents is different from what it was before.

Soludo admits that the roads in Anambra are bad, he said he would declare a state of emergency on roads if he is elected governor.

Valentine Ozigbo says if elected governor he would encourage the private sector to assist in building the dilapidated roads in Anambra state. “Anambra is totally shattered, not even broken,” he says.

On IPOB, all three candidates hinted that they will dialogue with the group. Mr Ozigbo said he will advocate for the release of Nnamdi Kanu and the de-proscription of the group. Mr Soludo said every option will be examined, including dialogue. Mr Uba also said dialogue was a route he was open to take.

Uba, just like Soludo, says he would declare a state of emergency on roads if he is elected governor.

Valentine Ozigbo of the PDP said Anambra deserves more than what it was getting from the APGA-led administration.

Both Messrs Uba and Soludo seem to have scores to settle. Both men wouldn’t stop hurling jibes at one another.

The former said Mr Soludo, despite serving in advisory capacity for various administrations, couldn’t advise the government on how to improve the roads in the state. “You were a senator,” Mr Soludo quipped, eliciting giggles from the audience.

Uba attacks Soludo, saying that he (Soludo) is management expert, not leadership expert. The APC candidate says running a state is different from running a bank. “I know my people and my people know me,” he says.

Mr Uba refuses to answer the question if he supports IPOB or any other group affiliated to it.

Mr Soludo says IPOB deserves to be heard and dialogue with.

Mr Ozigbo says there certain things IPOB does that he supports but there are actions they take that he condemns.

The session is on a short break.

The debate has resumed. Candidates are fielding questions on how to leverage the large population of billionaires in the state.

The candidates are talking about what they would do about the environment in Anambra state. Soludo says the gully erosion in the state is far beyond what the state government can handle alone.

He says he has a masterplan to tackle flooding in the state, especially the coastal areas in the state.

FACT-CHECK: How true are Soludo’s claims made during Anambra governorship debate?
Claim 1: Charles Soludo (APGA) claims he was three times winner of the best governor of the Central bank award.

The Central Bank’s document on Soludo’s service indicates that he won the Global and African Central Bank Governor of the Year, in 2005, 2006 and 2007. Different international media institutions, including The Banker Magazine published by the Financial Times of London, gave him the awards.

True, Anambra has the lowest unemployment rate in Nigeria

According to a report by the National Bureau of Statistics (NBS), Anambra State has the lowest unemployment rate, with 17 per cent in the second quarter of 2020.

According to a report by real-world and Amnesty International, the Anambra State House of Assembly enacted the Anambra State Vigilante Group law in 2004, under Chris Ngige PDP-led government. The vigilante law was enacted to give private groups the right to prevent crime in the state.

Mr Soludo is the candidate of APGA, the party of the incumbent governor, Willie Obiano.

“Erosion in Anambra is a catastrophe,” says Uba. Uba says Soludo hasn’t been advising the APGA-led government in the state on how to tackle the environment issues in the state. He says he would plant trees around the state to tackle erosion in the state.

The debate is now focused on health – what the candidates would do to improve healthcare in Anambra State.

Valentine Ozigbo says he would improve on access to healthcare if elected governor.

On health, Mr Ozigbo said he intends to run a performance-driven government. This he said he would do while also creating an environment to bring in Nigerians in diaspora with their expertise.

Mr Soludo says he would consolidate on what the current APGA-led administration has been doing in the health sector.

He says he would begin a “lifestyle change campaign”. He added that he would work with the private sector to improve the infrastructure sector by leveraging on the Anambra people in the diaspora.

Mr Uba said his administration, if elected, will establish three health clusters in the state.

The debate now moves to education.

On education, Ozigbo attacks APGA-led government as not doing anything to improve the education standard in the state. He says he will bring quality and affordability to the education sector if elected governor.

“Education has collapsed in Anambra State,” Uba says. He promised to employ the best teachers and pay them very well if he is elected governor.

Soludo is asked about his relationship with Uba when both of them served in President Obasanjo’s administration. “I didn’t know Andy Uba from Adam,” Soludo said.

Uba responded to Soludo’s remark. He reiterated what he said earlier that he assisted Soludo to become the governor of the Central Bank of Nigeria.

He said he was more relevant in the presidential villa than Soludo whom he described as an interloper.

Ozigbo described himself as a child of grace, when asked if he has the capacity to do the job of the governor. He says has been prepared for the job, but that it would be arrogance to claim he knows it all.

Claim 7: APGA’s candidate, Charles Soludo, claims Anambra State has one of the lowest, if not the lowest death rate from COVID-19 in the country.

Our findings show Anambra state’s death rate, which is 19 per cent, is not the lowest but could be counted as one of the lowest. There are four other states with lower figures, NCDC’s data show. Jigawa’s death rate is 17 per cent, Kebbi has 16 per cent, Zamfara has 8 per cent and Kogi has 2 per cent.

The Nigeria Centre for Disease Control (NCDC) data shows 2,387 cases have been confirmed as of November 1 in Anambra.

Claim: Anambra is the only state where a general hospital is administering vaccines.

Claim: Valentine Ozigbo (PDP) claims he was once awarded the best CEO award of the year.

Verification
According to the seven stars luxury hospitality and lifestyle awards, Mr Ozigbo won the 2016 Seven Stars awards as CEO of the year.

Concluding remarks from the candidates, Soludo says he would not need a penny from the government of Anambra if elected governor, and that he wants to serve his people. “I am prepared to give it (my best) you,” he says.

Uba says he would build a coalition government if elected governor. He says Anambra needs to join the political party at the centre which is APC.

Ozigbo, in his concluding remark, says Anambra does not need those who have been part of a dysfunctional past. He says PDP is the right party for the state in the election. He says he is a Devine candidate who emerged through a free and transparent primaries, unlike the candidates of APGA and the APC.

The three candidates hug themselves, smile and laugh, while the debate comes to an end.