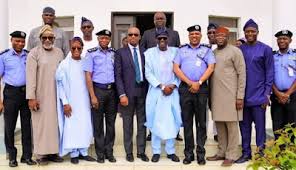 Faces at the Southwest stakeholders security summit: From Left, Oyo state CP, Sina Olukolu, Gov Rotimi Akeredolu (Ondo), Gov Gboyega Oyetola (Osun), AIG Leye Oyebade (Zone XI), Gov Dapo Abiodun (Ogun), Gov Babajide Sanwo-Olu (Lagos), DIG Taiwo Lakanu, Gov Kayode Fayemi (Ekiti) and Gov Seyi Makinde (Oyo).
Ololade Adeyanju/
The show must go on.
That appears to be the consensus in the Southwest today as Yoruba leaders bombard their governors with telephone calls amid fears that Thursday’s launch of the regional security outfit codenamed Amotekun is about to be scuttled by the Federal Government.
NewsmakersNG learnt that Ekiti State Governor, Dr Kayode Fayemi, has been delegated by his counterparts in the southwest to visit Aso Rock today and explain to President Muhammadu Buhari why the show must go on.
There were reports that the six Southwest governors were summoned to Aso Rock today over the planned launching of Amotekun holding by 10 am at the Oyo State Governor’s Office car park, in Oyo State secretariat at Agodi Ibadan.
The Host Governor, Engr Seyi Makinde did not honour the Federal Government’s last-minute summon, neither did the Convener of the event and Chairman of Western Nigeria Governor’s Forum, Arakunrin Rotimi Akeredolu.
According to sources within the Governor’s Forum, the states’ chief executives have been bombarded with calls from prominent Yoruba leaders who wanted to know what was going on.
 The Invitation Card for the event
NewsmakersNG learnt that the summon followed a move by the Inspector-General of Police, Mr Mohammed Adamu, to get clearance from the President to attend the event.
Amotekun is a local collaborative security agency jointly established by Oyo, Lagos, Ogun, Ondo, Ekiti and Osun states. The decision to float the outfit was made after a security summit organised by the Development Agenda for Western Nigeria (DAWN) Commission in July following heightened kidnapping and armed robbery in the region and the killing of the daughter of a Yoruba leader, Pa Reuben Fasoranti.
Amotekun’s personnel will include hunters, members of vigilante groups and the conventional security agencies, including the police and the Nigerian Security and Civil Defence Corps (NSCDC).
Members of Amotekun are to gather intelligence and effect arrest where relevant, with the overall goal of improving security in the Southwest.
Meanwhile, the Aare Onakakanfo of Yorubaland, Iba Gani Adams has expressed confidence that the launch of the outfit will put an end to criminality in the region.
Speaking with journalists in Lagos today, Aare Adams described the initiative as a welcome development and an idea that was long overdue.
The Aare Onakakanfo, who explained that Yoruba people have been expecting the initiative long ago, said, “Don’t forget I was one of those that pushed them to do this security summit before they now decided to organize Amotekun.
“I can tell you authoritatively that Yoruba people are happy with this operation Amotekun, anybody you see criticising Amotekun is either a sadist or such person doesn’t value lives. Anybody that is against this new initiative is an enemy of the southwest, and if anything unfortunate should happen in this region, such a person should be held responsible. “
Expressing his confidence in the new initiative, Adams said “Amotekun is not the real state police we are asking for but I just see it as a temporary means of tackling crimes in the South West.
“Ordinarily, we agitate for state police but if we don’t have state police now, something has to be done because state police can bring constitutional issues that may lead to amendment of our constitution. But a security outfit that will be controlled by the state government is highly needed now.”
Speaking further, Adams disclosed that there are information and security reports at his disposal to the effect that forces and criminal elements from Chad, Libya, Mali, Niger, have infiltrated the South West.
He explained that security threats confronting the Yoruba land have gone beyond kidnapping and Fulani herdsmen predicaments.
He said, “When we were young, we only knew of certain secret cult groups but today, you have so many cult groups at motor parks, garages and in the streets, that is another major security threat that we have in the south-west apart from the external Fulanis that have invaded our land.
“We believe that if the internal Fulanis had not opened the doors to them, they wouldn’t have come in. Amotekun will solve so many issues even beyond the Fulani herdsmen crisis. We also have information that some Yoruba people have connived with these criminal elements and are giving them information as to who and who they should kidnap to get money.”
While commending the South-West governors for the initiative, he pointed out that what they have done is in the interest of the Yoruba Land and therefore should be supported by all.
“What the governors are doing now concerning Amotekun is in the interest of Yoruba land, so we have to support them. Once this is launched, you will see that within one month, criminals will move back and they will know that the South West is no longer a safe haven,” Adams added.