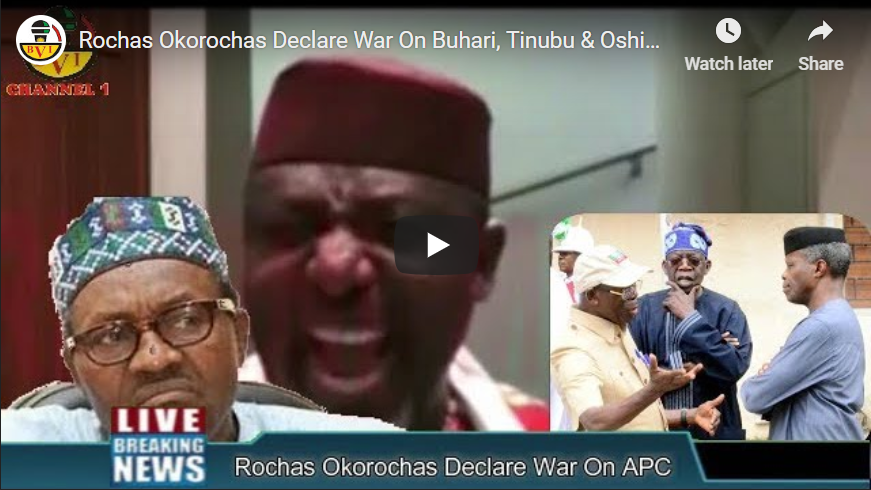 Both Governor Okorocha and his son-in-law, Nwosu, had insisted that Nwosu had won the October 6, 2018 Imo APC governorship primary election

The governorship ambition of Chief Uche Nwosu, son-in-law of Imo State Governor, Rochas Okorocha, on the platform of the All Progressives Congress (APC), suffered another blow, yesterday, as an Owerri High Court nullified the party’s primary that produced his ticket.

The primary was purportedly conducted on October 6, 2018, by the Ibrahim Agbabiaka-led Committee from which Nwosu had emerged.

The Deputy Governor, Prince Eze Madumere, had gone to court to seek an injunction restraining the party and the Independent National Electoral Commission (INEC) from organising, monitoring or supervising any other governorship primaries by the party in the state.

The presiding Judge, Justice K.A Ojiakom, had granted the prayers sought by the deputy governor, that the October 1, 2018 Imo governorship APC primary and the contestants be declared as the only relevant and valid primary process through which Senator Hope Uzodinma emerged the winner.

The judgement was based on earlier court order granted by an Abuja High Court, which had restrained the party from conducting any fresh primary election until the determination of the matter before it over the October 1, 2018 primary election, and, therefore, declared that the governorship primary conducted by the Agbabiaka-led Committee was an effort in futility and an affront to the court.

Both Governor Okorocha and his son-in-law, Nwosu, had insisted that Nwosu had won the October 6, 2018 Imo APC governorship primary election for which he has been at loggerheads with the National Chairman of the party, Adams Oshiomhole.