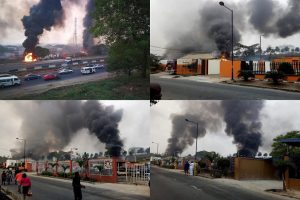 One of the explosion that occured in Magodo, which snowballed into a massive fire, took place at a facility known as Second Coming gas plant, situated in a densely populated area.

It was gathered that two people died in the Magodo inferno. Some charred bodies found by the perimeter fence of the gas station were evacuated by officials of the Lagos State Ambulance Services (LASAMBUS) while those that had various degrees of burns received first aid there. Another set of victims with severe burns were immediately moved to the Trauma Centre, Toll Gate for further medical attention.

According to reports, the fire was allegedly caused by gas leakage from one of the trucks inside the popular gas station, which was said to be a destination spot for cooking gas users around the area. It was further disclosed that the explosion was caused when a vehicle with faulty exhaust passed by the station.

Many people were injured following the fire, which immediately spread to other properties in the neighbourhood.

As the dark smoke and flame billowed into sky, men of the Lagos State Fire Service tried frantically to curtail it from spreading further and claiming more casualties. Motorists and pedestrians were also advised to take alternative routes to avert further disaster.

Speaking on the incident, the General Manager, Lagos State Emergency Management Agency (LASEMA), Mr Adesina Tiamiyu, said they were alerted at about 7.26 am, and on arriving the scene, it was discovered that the gas plant was on fire.  He disclosed that preliminary investigation by the agency revealed that three reserviour tanks used for storage of gas and one 33, 000 litre gas truck in the gas station were engulfed by fire, with a secondary explosion also taking place within the gas station.

He, however, assured that the situation was completely under control, adding that the perimeter of the vicinity was secured and evacuation of people from the scene effected. He also noted that the officials of Ikeja Electricity Distribution Company (IKEDC) had also completely isolated power supply from the affected area to avoid any other incident.

He stressed that proper investigation would be conducted to ascertain the possible cause of the fire and to also prevent future reoccurrence of “this unfortunate and avoidable incident in the state.”

Also, an explosion by leaking gas cylinder at an artisan’s shop in Ajara area of Badagry, killed four persons and left several others with severe burns. According to our correspondent, who visited the scene of the incident, three persons, two men and a woman lay dead at the spot.

Six buildings located near the workshop and six gas cylinders were destroyed by the explosion which occurred at about 9:50 am. Officials of the Federal Fire Service, Federal Road Safety Corps, Police and other security agencies were on ground to control the situation.

An official of the fire service, Mr Tunde Adeboye, said that they were able to put out the fire quickly, which helped in reducing the damage.

A senior police officer at the scene, who pleaded anonymity, said that four persons died in the explosion.

A witness, Mr Segun Adebunmi, said that the explosion was caused by a leaking gas cylinder at the artisan’s shop.

“It’s a testimony that I’m alive as I escaped the scene by the whiskers,’’ he said.

Another witness, Mr Tope Alabi, said that the explosion destroyed cars that were parked on the street.

“I heard a loud bang and the glasses of cars were shattering and the next thing I saw were human parts littered all over the place. The security agencies responded promptly and contained the situation. So, it didn’t escalate,’’ he said.