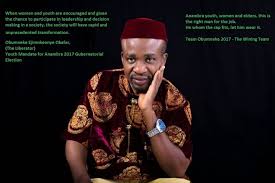 Biafrans in politics have started meeting daily and coming up with strategies they will use to ensure that the first anointed Biafran politician wins Anambra central 2019 senatorial election. This was made known to pressmen today by Obumneke Ejimnkeonye Okafor after his meeting with the Chairman of MOBIN, Barrister Emeka Emekesiri, who flew in from London to ensure that proper steps are taken to ensure victory in the polls.

Obumneke Ejimnkeonye Okafor who was nominated by National Conscience Party (NCP) to contest for Anambra central senatorial election and endorsed by Biafrans stated that he will defeat Chief Victor Umeh of APGA and the candidates that PDP and APC will field. He said that APGA, APC and PDP in Anambra central are confused and cannot get their acts together. Furthermore, he said that the withdrawal of Iyom Uche Ekwunife and Chief Charles Odunukwe who were formerly nominated by APC and PDP respectively is a clear sign of the parties’ disorderliness in the zone.
On APGA, he said that the party is entangled in series of crises which will affect its performance in 2019 general elections. Finally, he said that with Biafrans backing him and with the block votes he will get, he is sure victory. He thanked Biafrans for finding him worthy to be the voice of freedom in senate.