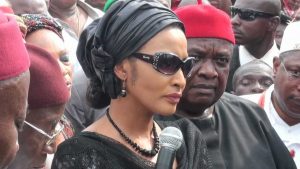 Umuigbo, see our fate. Governors from the Entire SOUTHERN REGION of Nigeria convened a crucial meeting in Enugu, IGBOLAND. Other governors came all the way from their respective domains in the South West and South South. Where were our own? Critical issues like enactment and implementation of the Anti-Open Grazing Laws, Regional Security outfits, Fiscal federalism, VAT amongst others were deliberated. AGAIN, WHERE WERE THOSE IN WHOSE BACKYARD THE MEETING WAS HELD, AND WHOSE PEOPLE ARE LIKELY TO BE MOST AFFECTED BY THE CRUCIAL ISSUES UNDER CONSIDERATION?

SOUTH EAST.. The meeting was hosted by Governor Ifeanyi Ugwuanyi of Enugu State, first to assent to the Anti Open Grazing Law in S.E, and here is the attendance register of his S.E colleagues…

This is a testament to the level of commitment and sincerity of most of our Igbo governors. Are The matters discussed not deserving of their attendance in person? These are issues that are critical to the survival and advancement of our people. Why are they toying with the future of the Igbo race? What hope is there for our people?????Ebeeeewu!