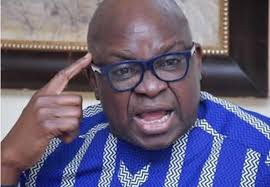 Armed Policemen Seal off Ekiti Govt House, Arrest Fayose’s Aide
Ekiti State governor, Ayodele Fayose
Armed policemen on Wednesday morning sealed off Ekiti Government House and prevented supporters of Governor  Ayodele Fayose from entering.
A rally scheduled to take place at the new Pavilion located at Fajuyi, which was within the vicinity of the Government House was botched as policemen teargased the participants .
The policemen were shooting sporadically into the air as they dispersed the PDP members who were called by Fayose to rally support for Prof Kolapo Olusola
As at the time of filing this report, no human and vehicular movement was allowed from the Fajuyi end into the Government House.
The PDP members had massed at the new pavilion when policemen swooped on them and dispersed the gathering.
Those affected fled in different directions to prevent being arrested by police.
A close aide to governor Fayose called Abiola was arrested at Fajuyi area and he is now being detained at the Criminal Investigation Department (CID) section at the police headquarters in Ado Ekiti.